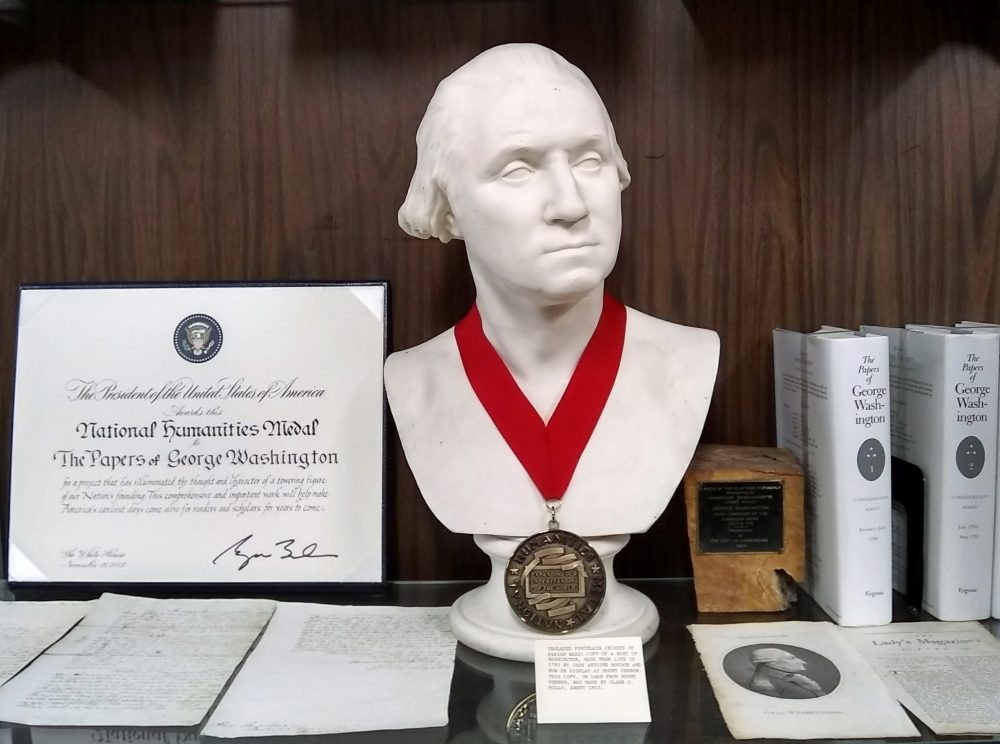 by Kevin Butterfield, Executive Director of the Fred W. Smith National Library for the Study of George Washington at Mount Vernon
February 15, 2019

The Mount Vernon Ladies’ Association (MVLA) has protected and preserved George Washington’s home since before the Civil War. And their mission has always gone beyond one of simple architectural conservation. The MVLA understands that some of the most important ways of fulfilling its mission involve reaching far outside the boundaries of the estate, and Mount Vernon’s commitment specifically to preserving and disseminating the written historical record of Washington’s life and public service goes back more than a century. Just over fifty years ago, they made an especially transformative decision to partner with the University of Virginia (UVA) on the Papers of George Washington.

The idea that Washington’s papers merited both preservation and publication goes back a long way. In 1837, Jared Sparks began publishing a 12-volume edition that was considered definitive for half a century. Between 1889 and 1893, Worthington C. Ford put forward a more complete 14-volume edition of The Writings of George Washington.

Not long after, in 1915, the MVLA began working with John C. Fitzpatrick on an edition of Washington’s diaries (the first volume of which appeared in 1925) and began exploring the possibility of working with Fitzpatrick on the “unpublished” letters of Washington. They later learned the federal Bicentennial Commission, set up in 1924 to organize commemoration of the bicentennial of Washington’s birth, was planning to produce a more complete set. The MVLA ultimately decided to abandon their own project, believing that the commission’s edition would be more comprehensive. The resulting 39-volume edition, edited by Fitzpatrick, was published between 1931 and 1944. But the Fitzpatrick volumes, like all the previous editions, focused only on letters written by Washington and ignored the scope and scale of his entire incoming and outgoing correspondence. To better understand Washington, there was more to do.

About 20 years later, in 1967, the president of the University of Virginia, Edgar F. Shannon, Jr., launched a study to explore the possibility of creating and hosting a complete, comprehensive effort to publish the papers of George Washington.

It all came to fruition in January 1968. On Jan. 3, UVA President Shannon; MVLA Regent1 Rosamond Beirne, from the State of Maryland; and Mount Vernon Resident Director Charles “Cecil” Wall2 sat down to lunch at the Boars’ Head Inn in Charlottesville. They were joined by a few others, including Merrill Peterson, chair of the UVA History Department, to discuss plans to work together on the first comprehensive edition of Washington’s papers.

The all-important decision came two weeks later. The Boars’ Head Inn conversation was discussed on Jan. 19 during a morning telephone conference call of the “Emergency Committee,” or executive committee, of the MVLA. Thankfully, a full transcript of their discussion survives in the archives of the MVLA, housed at the Washington Library at Mount Vernon. It’s a marvelous document because it shows how the board thought about this project, which now, in hindsight, we think of only as a tremendous success. The Regent, Mrs. Beirne, noted that everyone was waiting to see “who would get started and get the thing off the ground…. and Mr. Wall feels this is a very important thing for us to do and I do too.” But it was no small amount of money: the MVLA needed “to decide whether … we can give them twenty-five thousand dollars or thirty thousand dollars a year out of what our new funds will be from raising the entrance fee.”

It did not take long at all for the committee to decide to support the Papers at $25,000 a year, for two years, with an option of continuing that support beyond the initial two-year sponsorship. Their support of the project continues to this day. And from the very first, the Papers of George Washington, according to the preface of Volume 1 of the Colonial Series, was conceived of as a partnership: “the president of the university and the regent of the Mount Vernon Ladies’ Association decided that their respective institutions should sponsor a new edition of the Papers of George Washington.”

But how long would this project potentially last? The Regent told the committee: “Well, they think this thing may take twenty years to do.” Indeed, just about every announcement of the new project cited 1988 as a likely date by which the whole endeavor would be wrapped up. The initial press releases that came out later that year noted, “It is expected that this edition of the Washington Papers, to be published by the University Press of Virginia, will total 75 volumes and be completed by 1988.” But no one was sure. And, as we can see from the project’s recent celebration of its 50th anniversary, those early estimates were a little optimistic.

That uncertain timeline was a little unnerving for some members of the board: Elizabeth Cooke, the Vice Regent for New Jersey and soon-to-be Regent of the MVLA, expressed such concerns: “We are here to restore and preserve Mount Vernon. I feel the publication is very important—by all means we should give our name by all means we should give support. But, I don’t feel that the major part of the national support by any means should come from us.” Her concern was a good one, and in the end Mount Vernon’s endorsement of the project helped to bring in additional funding that was impressively robust.

Cecil Wall had already put his finger on this key benefit of the partnership during that important Jan. 19 conference call. “It’s our [Mount Vernon’s] prestige,” he told the MVLA, “our name that is wanted I think really more than money—although the assurance of the money and the name will mean a great deal in Richmond.” Sure enough, just two months later, the Virginia General Assembly made a large appropriation to support the first two years of the project. President Shannon reported to Mrs. Beirne: “Your assurances on behalf of the Mount Vernon Ladies’ Association of joint sponsorship with the University and commitment of $25,000 for each year of the forthcoming biennium was of course what made this appropriation possible.” Additional support would soon come from the federal government, with the National Historical Publications and Records Commission and National Endowment for the Humanities contributing a great deal ever since.

On June 22, 1968, the first press releases went out to announce the creation of the Papers of George Washington project, with the University of Virginia and the MVLA described as cosponsors. A few months later, the project officially commenced at Mount Vernon. On Oct. 27, 1968, the Washington Post reported that a dinner had been held the night before “in the banquet hall of Washington’s home” (which we now call the New Room, and in which we would now never, ever let a large group have dinner) to launch the project. There was, of course, no better place in the world to do it.

One final story: just as the project began, Mount Vernon sent a “duplicate of the Houdon bust” of George Washington to “remain in your editorial offices until the umph-t-umph and final volume of the Writings of George Washington goes to the printer,” according to a letter by Cecil Wall that accompanied the bisque porcelain piece. Though Wall may have imagined that the end would come in 1988, the bust remains in the offices today. And this Mount Vernon piece will stay there, on “indefinite loan,” until the “umph-t-umph and final volume” is published.