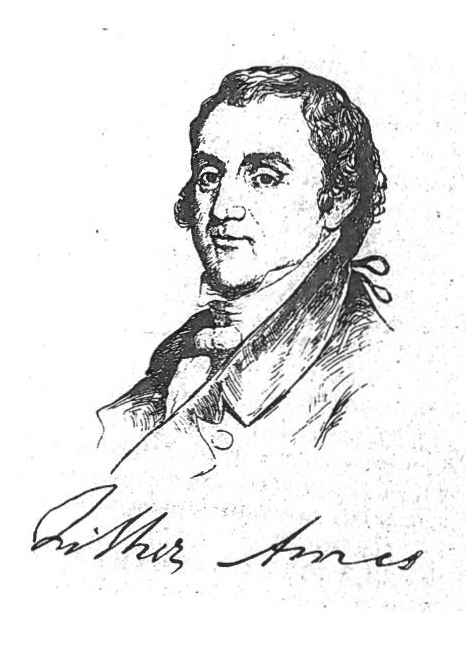 Massachusetts congressman Fisher Ames performed an important political service for President George Washington on April 28, 1796. On that date, Ames gave a speech that impelled a divided House of Representatives to enact, by a 51–48 vote on April 30, the provisions necessary to implement the contentious Jay Treaty.1 That treaty determined many aspects of the relationship between Great Britain and the United States, and upset numerous people who believed that it showed ingratitude, and even hostility, toward France and the assistance the French had given the nascent United States during the Revolutionary War.

In his long oration, which he delivered while feeling unwell, Ames began with a forthright acknowledgement that the Jay Treaty had “aroused . . . the passions of the country” and made sober consideration among the people’s representatives a difficult task.2 He moved quickly to the heart of the matter and dismissed all pretensions “that the Constitutional right of this House is at stake.”3 The Constitution gave the president the power to negotiate treaties and the Senate responsibility for ratification. A treaty became binding when properly negotiated and ratified unless it was “bad, not merely in petty details, but in its character, principle, and mass.” Such a determination required a “general consensus of the enlightened public” and not a reflexive response “to the clamor of party intemperance.”4 Having caught his colleagues’ attention, Ames expanded on the many benefits of the treaty. He particularly emphasized greater security for frontier settlers and harmonious relations with Great Britain.5

The speech impressed George Washington. He applauded Ames in a private letter, stating “his reasoning is unanswerable.”6 Washington also showed his appreciation by inviting the Massachusetts congressman to visit Mount Vernon after the congressional session ended on June 1.7 Ames subsequently toured a portion of the South, but no evidence has been found that he visited Washington’s home. Ames did, however, spend time in Virginia, which he later disparaged as “not in a state to brag of; the land is good, but the inhabitants scattered, and as bad farmers as politicians.”8 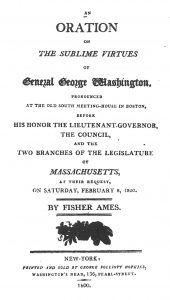 Ames clearly did not consider Washington one of those “bad” Virginians. In a eulogy delivered on Feb. 8, 1800, at the request of the Massachusetts government, Ames went beyond typical praise. With colorful images and rhetorical flourishes, he pronounced Washington’s greatness as not “seen in the display of any one virtue, as in the possession of them all.”9 Ames especially lauded Washington’s presidency, which “will form an epoch, and be distinguished as the age of WASHINGTON.”10

Ames ended his career in the House of Representatives when Washington departed the role of president on March 3, 1797. Ames then practiced law at his home in Dedham, Mass., and declined the presidency of Harvard in 1804 for health reasons. Given his dedication to the rise of the United States as a nation—something he very much shared with George Washington—it is fitting that Ames died on July 4 in 1808.

Interactions between Washington and Ames during 1796 will be included in the upcoming volume 20 of The Papers of George Washington, Presidential Series (1 April–21 September 1796).