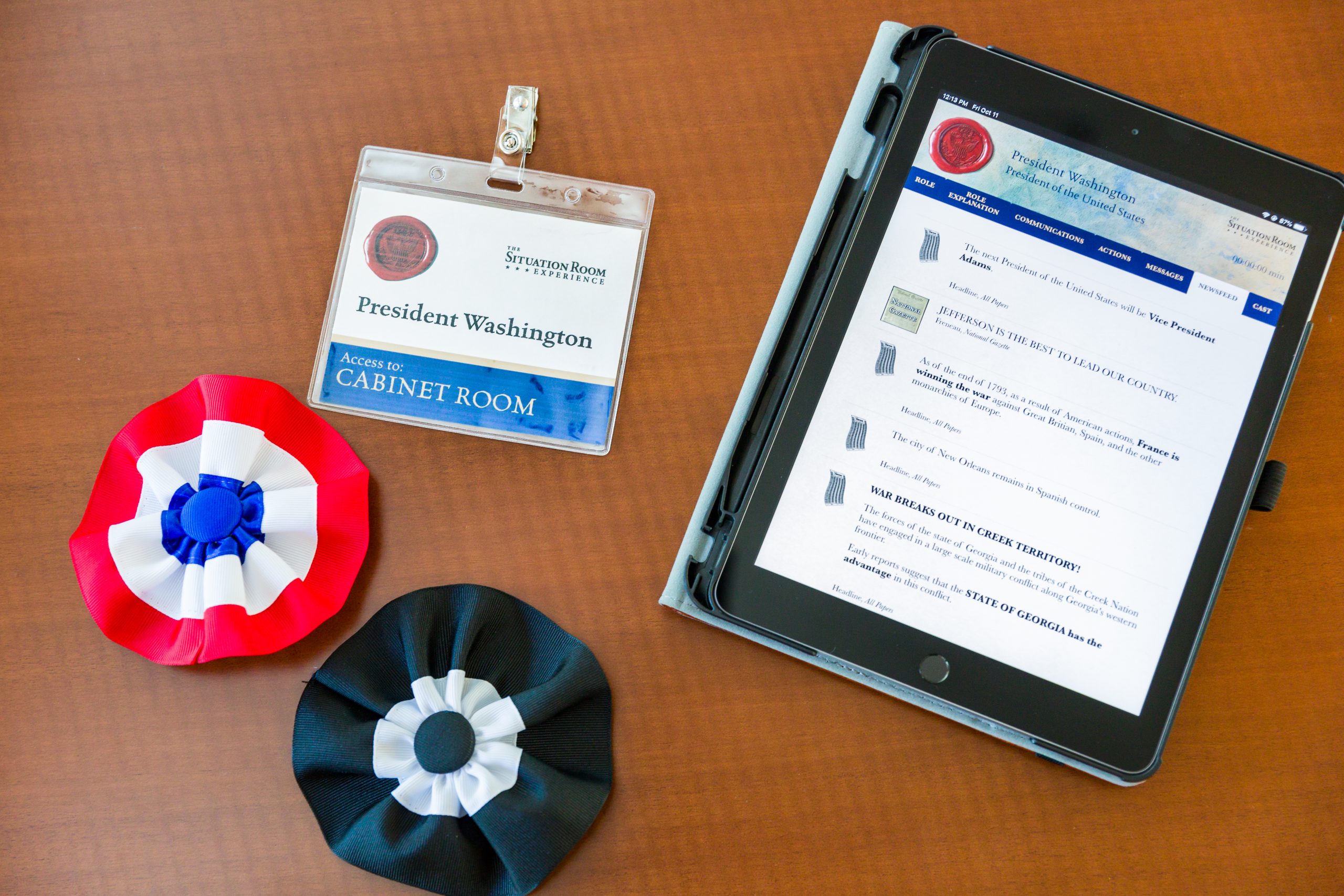 One of the most fun projects I have contributed to since coming to work at Mount Vernon as the in-house Washington Papers editor was the creation of The Situation Room Experience, an interactive game that requires users to assume the role of historical actors during George Washington’s presidency. A few presidential library sites have developed Situation Room scenarios as a tool to educate visitors and enliven their learning experiences. Mount Vernon’s version focuses on the neutrality crisis of 1792-93, often called The Citizen Genet Affair, after the French minister, Edmond Charles Genet, who tried to pressure the U.S. into supporting revolutionary France’s wars against Great Britain and the monarchies of Europe.

The computer-based game was fully implemented onsite at Mount Vernon’s Washington Library a few months ago. The target audience for the game is high school and college student groups (a large group is required to play), though middle school students and older adults can also participate. Players get tablet computers that first brief them on historical context and the biography of their character, and then inform them of the events that unfold and decisions they must make as the game is played. Mount Vernon staff, including myself, were among the first to play the scenario. The bulk of the credit for creating the game goes to the programmers and designers, but it was exciting and entertaining for me to see the characters, political dilemmas, and diplomatic maneuvers I helped write portrayed by friends and colleagues. Characters include, but are not limited to, President George Washington, members of Congress, newspaper printers, representatives of Indian nations, and Citizen Genet himself. Each person is tasked with achieving the diplomatic and policy goals of the historical figure they portray. Along the way, events arise that complicate or facilitate these aims.

When I played, I was assigned the role of George Hammond, the British minister to the United States. It was odd, but fun, to think about ways to undermine the Washington Administration, counter U.S. policy interests, and sour relations between France and America. Elements of the game are designed to give players different avenues to realize their policy goals, but if one (or more) of these channels are neglected, then they can hinder a player’s success in other parts of the game. This is especially significant in the historical context of the period, where the country’s first political parties formed partly over divisions about what role the U.S. should play in the unfolding wars of the French Revolution. So, while President Washington tries to steer a course that will preserve American peace and independence, divisions within his cabinet over how to best achieve those goals and secure a popular political advantage risk undermining his efforts. At the same time, members of Congress and representatives of the Indian nations are supposed look after the security of the people they represent, find markets for the goods they produce, and secure access to European manufactured goods.

As the British minister, my primary objective was to prevent the U.S. from entering the war on the side of the French. My secondary goal was to work to prevent the U.S. from trading with France, particularly war materials, but more broadly to prevent a trading relationship that would limit the influence Britain and its trade goods had among Americans. Relatedly, I needed to maintain good relations with the Indian nations on the border between British Canada and the U.S., who the British government saw as a buffer between Britain’s colonies and land-hungry American settlers. To my surprise, it was difficult to get American officials to commit to trading for British goods. This was surprising because I’m usually very persuasive. But seriously, historically speaking, Britain was the world’s preeminent manufacturing and commercial power, and Americans prized British manufactured goods. It turned out that establishing trade routes that supplied French wine proved particularly enticing to my fellow game participants. Cabernet, it seems, was mightier than English swords.

The game’s conclusion was part success and part failure for this British minister. Riven with policy divisions, the American republic declined to support either side in the war, was plunged into discord, and broke apart. Despite this, Britain found itself on the losing end of the war with France. The divided outcome highlighted some of the frustrating realities of governing. No matter how persuasive a historical actor, people often choose to follow the path they think produces the greatest benefits. The result also highlighted in stark terms the reasons why foreign policy decisions and foreign influence were a huge concern for Americans in the early republic. George Washington famously, and controversially, declined French entreaties to honor the alliance of 1778, and in 1793 declared American neutrality in the conflict. This led to a positive outcome for the U.S., but Washington also benefited from a newly conciliatory British government, and a break in the fighting between France and its enemies. A fictional game is not required to provide players with the same good luck. It is an important reminder that the events of history are not inevitable, and different events can lead to different conclusions if the people entrusted with big decisions are not careful.