Caitlin is a Research Assistant for the Bibliography Project and is part of the Papers of George Washington social media team.

We’re excited to bring you the fourth episode of “George’s Farm Animals!” This video features the remarkable story of Royal Gift, a prized Spanish jack sent to George by the King of Spain, Charles III (1716-1788). 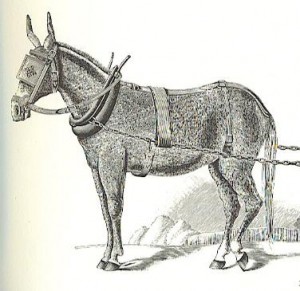 George had been trying to procure a Spanish donkey for quite some time. Through his research on the new methods of agriculture and his own experiments, he had determined that mules were harder and cheaper workers than horses. He wrote to Arthur Young, the famous British agriculturalist who popularized new agricultural techniques, about his hopes for the future of American farming.

Virginia had excellent horses, including pure bloodlines of Arabians and Thoroughbreds, but the donkeys and mules in the colonies were not of the same high quality. Finding a quality jack to breed with a mare in order to have strong mules meant, for George, importing one from Spain. Thought the best in the world, the donkeys were difficult for foreigners to procure because the permission of the King of Spain was required to buy one–even after gaining permission, the cost of importing one was enormous.

George had made connections with members of the Spanish court during the Revolutionary War and attempted to use them to procure his jack. Don Juan de Miralles, a Cuban Merchant, slave trader, and agent of the King of Spain during the war, had promised a jack to George, but passed away in 1780, after visiting George’s encampment at Morristown. After several more attempts, George had nearly given up on the prospect because of the expense of the animals.

However, George’s networking finally paid off. His contact Richard Harrison (d.1795), consul for the United States in Cadiz, asked William Carmichael (1738-1795), the U.S. chargé d’affaires at the Spanish court, to help him with getting George a jack. Carmichael then asked the Spanish foreign minister, José Monino y Redondonde, Conde de Floridablanca (1728-1808), for the favor, and Floridablanca at last procured King Charles’s permission.

George was immensely excited about his jack’s arrival and wrote careful instructions for how the jack was to be treated on his journey from Gloucester, to Boston, to Mount Vernon. John Fairfax (d.1843), a young overseer at Mount Vernon, completed his mission successfully, and arrived with the jack and his Spanish keepers in December 1784. When his jack arrived safely from long, long trek from Spain, George was eager to begin breeding mules right away.

He hadn’t counted on the jack’s reluctance to perform this duty; in several instances, George was forced to offer the services of his Arabian stallion Magnolia to people who had already paid for their mares to go to Royal Gift. His customers didn’t seem unhappy with the alternative of the stallion, who was descended from one of the American “foundation mares,” Selima, a famously successful racehorse. George had gone through too much trouble to get Royal Gift to give up on his mules, though, and at last managed to excite the jack’s desires by letting him catch sight of female donkeys, or jennies, and then substituting them for a mare at the last moment.

There were mules and jacks in the colonies before Royal Gift came along, of course, but George improved and popularized his breed of mule and did much to increase their presence in the United States. If you’re still curious about Royal Gift, Mary Wigge recently wrote a blog post on her own project featuring his journeys.

Correspondence quoted from in the video:

George Washington to the Marquis de Lafayette, 10 May, 1786

Watch this video, as well as the rest of the videos in “George’s Farm Animals,” on our video page.

We had a lot of help with making these videos happen; thank you to you all!

Mule Historian Deb Kidwell was an enormous help to us and kindly shared some of her extensive research on Royal Gift from her upcoming book. She helped us with preparing the script, navigating the many myths surrounding Royal Gift, and finding images to feature.

Mary Thompson’s essays on George Washington’s animals, many of which appear in the Mount Vernon digital encyclopedia, were also extremely helpful in preparing the scripts for all the videos on the series.

Mary Wigge helped us navigate the financial papers concerning Royal Gift, and found the advertisement for his services in the Maryland Journal and Baltimore Advertiser. Thank you!

Thank you to Tim and Melissa Branning for allowing us to film their donkey, J.J., Katie Erhler, for letting us film her miniature donkey, the Al Kaly Shrine for the footage of their mules, and Shari Conley for helping us with filming.

We’re very grateful to everyone who lent their voices to reading Washington’s documents, and to Eva Lucy Alvarado and Spencer Park, for volunteering their time and talents to help us film.

Thank you to Claire Eager, Patrice Kyger, Caitlin Hamilton, and Marti Lupinettem for your helpful feedback on the filming and scripts. Thank you especially to Emily Marrs and her third grade class, who gave us invaluable comments on “George Washington’s Black Cattle.”

Finally, thank you again to Mount Vernon for letting us film all of their beautiful animals and letting us have George’s home setting as the backdrop for our narration.