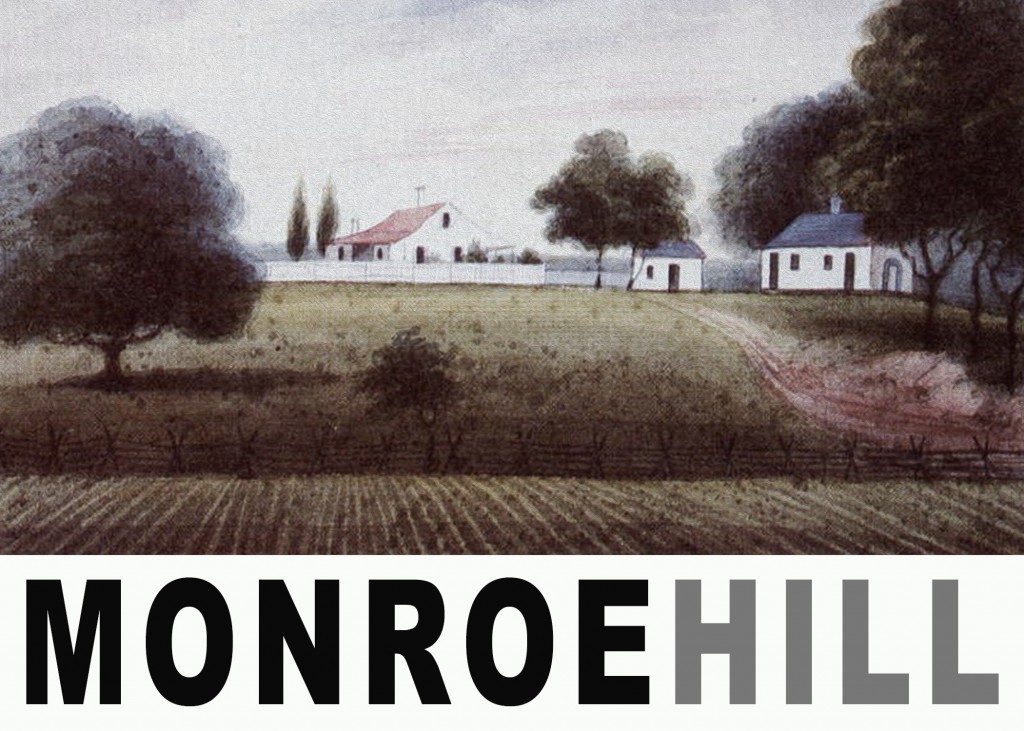 As the film prepares to be debuted at the Virginia Film Festival, Ferraro sat down to answer questions about his experience in being a part of the documentary.

When and how were you contacted to become a part of this film? Had you known the director or known of the project before that?

My involvement with Monroe Hill began in late April of this year on the day when the Jefferson Trust announced its 2015 awards. The whole chain of events shows the importance of breaking from routine on occasion and mingling with others undertaking new ventures.

I was invited to the Jefferson Trust awards ceremony as a recipient the previous year of a grant to launch “George Washington, Day-By-Day, 22 February 1732–14 December 1799” (see daybyday.gwpapers.org). A downpours moved the event from the Lawn to a somewhat cramped Pavilion III. The Jefferson Trust made fourteen awards in 2015, and during the presentations I learned for the first time about the Monroe Hill film, which had been proposed by Brown College, the residential college that now occupies the buildings on the site of the one-time home of James Monroe, famous for many things but primarily his two terms as United States President (1817–25). Intrigued by the idea to create a documentary film centered on the early life and career of a person on whom I had published two substantial book chapters, I determined to meet the film’s director.

This determination led me to Eduardo Montes-Bradley, whose previous credits included films on Julian Bond and Rita Dove. Eduardo was born in Argentina and now lives in Albemarle County, Virginia. Eduardo exuded infectious enthusiasm for the Monroe Hill project and was excited to learn that my research on Monroe had focused on the 1790s, the decade most central to the production because that was when Monroe owned the land, tried to make it a profitable farm, and lived there when not engaged in government service.

Eduardo and I agreed to meet for lunch and a few days later continued our discussion. Like me, Eduardo had come to understand Monroe as an energetic character who had been portrayed improperly as a mere appendage of Thomas Jefferson and James Madison. My ability as a documentary editor and historian to place Monroe in the larger context of his time struck Eduardo as vital to the success of the film. He invited me both to be an on-camera presence and a resource as he pondered themes and the larger narrative structure.

What was your role?

My primary role was to provide accurate historical content and context. Having worked extensively with the documentary records of James Monroe, George Washington, and their contemporaries, as well as having great familiarity with the scholarship on the period, I could correct chronological or other factual errors and assist Eduardo in putting the historical characters in motion as they exchanged ideas or disputed views.

Monroe was remarkably busy during the time he owned Monroe Hill and the surrounding 1,000 acres that he inaccurately foresaw as a productive plantation. He left his property in late December 1790 to serve in Philadelphia as a United States senator from Virginia. Monroe’s service in the Senate ended in 1794 with his surprising appointment as minister to France by President Washington. That controversial tenure during the height of the French Revolution came to a close with Monroe’s recall two years later and his return to Virginia where he contributed to the final split of American politics into two parties. Monroe’s election as Virginia governor in December 1799 coincided with his move from his first property near Charlottesville to “Highland” neighboring Jefferson’s Monticello. Eduardo’s challenge was to maintain a focus on the land while also telling a story of the United States—then a new nation implementing the Constitution—as it defined its course in the world.

The cast of characters becomes quite large because the narrative extends to Europe where the United States faced diplomatic challenges with both Great Britain and France. Concrete examples of my assistance include catching in early cuts inaccurate references to the Irish nationalist Wolf Tone as “Tone Wolf” and George Washington as chairman of the “Confederation Congress” when he was chairman of the Constitutional Convention.

What were you expecting and what did you enjoy most about the experience of participating in this film?

This was my second experience with a documentary film. My first was in 2010 on a film titled Fractured Union overseen by Mount Vernon’s educational division. That film centered on the relationship among George Washington, Thomas Jefferson, James Madison, and George Mason and showed how men with striking political differences could remain friends. Fractured Union was targeted at secondary schools and public television. Reenactors portrayed the central figures. I was among several historians who provided comments on the political issues that divided the men.

Monroe Hill has been a much more dynamic experience. Rather than one day sitting in a room with a group to chart scenes and another afternoon on a stage filming comments, Eduardo has encouraged reaction and rethinking to various cuts of the film and sought out a variety of settings for both their visual appeal and historical significance. His goal has been to place modern scholars in dialogue with each other in a way that initiates a conversation about Monroe’s property and its place in the launch of the new nation. This is much different from using modern scholars in a didactic manner to tell viewers something final and conclusive.

The intellectual energy generated by Eduardo’s approach to documentary film has been the most enjoyable part of my engagement in the project. I have gained new insights into Monroe and the 1790s through my participation.

I have been enormously impressed with Eduardo’s skill as a film maker. He seamlessly blends his own shots, black-and-white-silent-era-footage, historical images, background music, and scholarly commentary in a probing way that should engage any person with the slightest interest in the topic. Eduardo has astonishing creative energy and a boundless drive to make the final film as fine as possible. Eduardo and I have been quite compatible, probably because I have a similar enthusiasm for history and the documentary record. I also am open to new interpretations when evidence supports such views, and like Eduardo, love interpretive experimentation. Eduardo frequently commented on how much he appreciated my patience with retakes, saying that a willingness to redo things to improve the footage was far from a universal attribute.

My interactions with other contributors has been virtual rather than direct. Like other contributors, I have seen cuts of comments at various stages of the film’s creation. Eduardo processes the many responses that he receives from contributors to revise the film. I am glad that when I recently saw some of the contributors at the anniversary celebration of the laying of the Pavilion VII cornerstone, they spoke favorably of the Monroe Hill segments with my remarks.

What do you hope people will take away from this film?

I hope that people who see this film come away thinking that contention is a longstanding reality in American politics and that changing one’s thinking is not a flaw or failing. The world is a complex place, and life poses challenges. What seems sensible and appropriate today may be foolish and inappropriate at a later date. Monroe bought his first farm near Charlottesville thinking that it would become a productive plantation. When the land proved difficult to work and unfruitful, he concentrated his efforts on government service and purchased a different tract. From what we can tell, no one was happier than Monroe to see his former farm become the location of a great seat of public education.

Although focused on a very specific place, Monroe Hill bears upon issues current then and of timeless importance. Liberty, opportunity, slavery and race relations, national aspirations, and the operation of representative government all receive treatment. People who see this film will realize that problems and issues that vex us also vexed the founding generation of the United States. There are no easy answers to these difficult questions, but it is essential that we try our best to be generous and humane.

What did you learn through this project?

As mentioned earlier, exchanges with Eduardo gave me new insights into Monroe’s actions and motivations. Translating written records into a visual medium called for a different kind of thinking as well as very concise speaking. Renewed, and concentrated, attention to topics previously considered surfaced other possibilities. Reflecting now, I learned that it is wise to revisit past research even without the impetus of a prospect to present that material in a documentary film or other visual media. Additionally, I learned yet again that it adds interest to my daily work editing documents if I engage with scholarly activities beyond my routine tasks.

Though the production film has been completed, your role has not. How else will you be contributing to this project?

First, I must clarify that Eduardo continues to tweak the film and that it has not yet completed production. He is so committed to perfecting every detail and making the film as engrossing as possible that the ease and power of film editing on a computer is almost a curse rather than a blessing!

As for my role moving forward, I am very excited about the debut of Monroe Hill at the Virginia Film Festival on Friday, 6 November, at 5:00 PM in the Newcomb Theater. There will be a panel discussion following the showing featuring Eduardo, myself, and I believe three other central contributors (Sara Bon-Harper, Director of Ashlawn-Highland; Daniel Preston, Editor of the Papers of James Monroe; and Scott Harris, Director of The James Monroe Museum in Fredericksburg, Va.). The panel should shed interesting light on the film’s evolution as well as the important questions it raises about the United States in its early years and the nation’s current trajectory.

Further into the future, I plan to join Ed Lengel, Director of the Washington Papers, in finding suitable venues for Monroe Hill viewings. Appreciating the time and intellectual contributions I gave to the production, Eduardo asked whether the Washington Papers would like recognition as a sponsor of the project. Ed promptly accepted this invitation and expressed his interest in securing the widest possible audience for the film. Probable venues are Mount Vernon and other historical sites and societies. I am sure, too, that efforts will be made to screen Monroe Hill on public television outlets.

Finally, Monroe Hill is an early contribution to the University of Virginia’s Bicentennial Celebration that will begin in earnest in 2017. If the bicentennial celebration initiates more films or programs that include Monroe or George Washington, I will be an earnest backer and seek to participate in some substantive manner.

For more information, including how to buy tickets, please visit virginiafilmfestival.org/films/monroe-hill/.