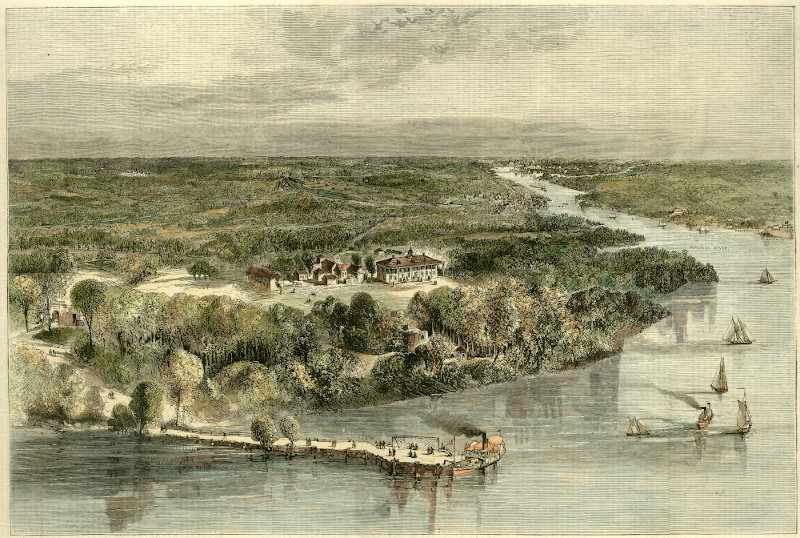 An advertisement on Mount Vernon’s website states that “No method of transportation to Mount Vernon was more popular during the 19th century than riverboat cruises.” Even today, Spirit of Mount Vernon excursion vessels transport thousands of visitors to George Washington’s home each year.1

There was a time, however, when visiting Mount Vernon by water was not so welcome.

The story begins in the mid-1780s when James Rumsey harnessed the power of steam to propel ships up the Potomac River—a project originally endorsed by George Washington. By 1813, regular steamboat service began on the Potomac, making mass-transit tours to the Founding Father’s estate inevitable.2 Mount Vernon was then occupied by Bushrod Washington, George’s nephew and an associate justice of the United States Supreme Court. Often away from home while presiding over cases, Bushrod may have found it trying to leave his sickly wife, Julia Ann Blackburn, home alone while crowds of visitors thronged the grounds—crowds who often failed to observe, in his opinion, the level of decorum and respect owed his deceased uncle.

Treading the fine line between hospitality and reserve, Bushrod took matters into his own hands on Independence Day, 1822, when he issued a rather sobering public notice: “The feelings of Mrs. Washington and myself, have been so much wounded by some late occurrences at this place, that I am compelled to give this PUBLIC NOTICE, that permission will not in future, be granted to Steam-Boat Parties, to enter the Gardens, or to walk over the grounds, nor will I consent that Mount Vernon, much less the Lawn, shall be the place at which eating, drinking and dancing parties may assemble.” Although he intended not “to give offence to any person,” Bushrod explained that “[t]he respect which I owe to the memory of my revered uncle, and that which I claim for myself, forbid my longer submitting to similar indignities.” That said, “Respectable strangers and others, be their condition in life what it may, who may be led by curiosity to visit this place, will at all times, (Sundays always excepted) receive the same attention which has heretofore been uniformly and cheerfully shown such characters.”3 The notice circulated in several newspapers of the day, both nearby and farther afield.4

By the following year, the notice had been acknowledged, but it was not always observed. A pre-authorized steamboat party made its way to Mount Vernon on July 4, 1823, but did so cautiously: “Having been politely permitted by Judge Washington to celebrate the 47th Anniversary of American Independence, at the tomb of the Father of his country—a numerous and respectable party of citizens of this place, with several strangers of distinction, assembled at an early hour, agreeably to previous arrangement, on board the steamboat Washington.” When the boat arrived, a committee proceeded “to pay their respects to the proprietor of the ground, to notify him of the arrival of the company, and to select a suitable place for the performance of the appointed exercises.” After the services, while the band played a salute to Bushrod’s wife on the mansion’s piazza, the judge exchanged “friendly salutations” with the company, “in which he expressed his thanks for the tribute of respect paid to the memory of his revered uncle.” According to the article, the event was a success from beginning to end.5

Not so in 1826, when on May 14, a company of 30 members of Congress aboard the steamboat Enterprise attempted to pay their respects at the tomb of George Washington on a Sunday. As they approached the landing at Mount Vernon, they were informed of the judge’s prohibition against steamboat parties (“only one or two of them ever having heard of such thing”). A deputation of three Congressmen walked up to the house to seek Bushrod’s permission for the party to debark, but the committee was met with a prompt refusal. Bushrod, who “appeared much exasperated,” explained that if they persisted, he would sue the captain of the vessel. The Alexandria Gazette reported him saying, “As to permitting your company to land, I will not; I would not permit the President of the United States and his Secretaries to come here in contravention of my positive orders and publications made,” after which the three men retreated, perplexed. Even the Gazette, which published on May 18 Bushrod’s own account of the event and a reprint of the 1822 “Notice,” could not comprehend his seemingly “violent” manner, which was “very different from that which we consider the gentlemen were entitled to expect. A refusal in calm feelings and a polite manner, with gentlemen like those who composed the committee, representing the respectable company they did, ought to have been made.”6 The story circulated across the mid-Atlantic and New England.7

By 1828, Bushrod was faced with another dilemma. Turning away boatloads of strangers was one thing, but what about when friends—or family—came calling? In late April of that year, Rosa Wirt, the daughter of Attorney General William Wirt, Bushrod’s friend, wrote her father in Philadelphia about a proposed expedition to Mount Vernon. “The girls,” she wrote, “are very desirous to go by water <bu>t fear they will be obliged to go by land, as they have heard <th>at there is a prohibition for steam-boats landing there.” Could her father “ascertain (as Judge Washington is now in Philadelphia) whether there is any possibility of their being allowed to land there, as there is such a large party of them, that it would be extremely inconvenient to go by land”? She quickly added that “Miss Silsbee“—probably Mary Crowninshield Silsbee, the daughter of Massachusetts senator Nathaniel Silsbee and future wife of Jared Sparks—”will form one of the party.”8 The attorney general immediately conveyed the request, writing to Bushrod the morning of May 1: “if there be a general prohibition I do not myself see how an exception can be made without giving offence or letting in all the evils the prohibition was intended to prevent— Perhaps a permit under your sign manual to Miss Wirt and her party may avoid the evils— But I do not ask it—I merely suggest it—and beg you to be assured that your refusal will not give me an instant’s pain—because I know the thing would be done, if it ought to be done.”9

While the difficulty of Bushrod’s decision can be gleaned from his answer, he did not waver in stating the facts. Since Wirt was leaving town by noon, the judge had to respond quickly. He replied on the verso of Wirt’s note: “In Court, & on the verge of a trial, I can only state my dear Sir that you have been correctly informed as to my prohibition of Steam boat parties to M. V.— It has been made public for more than 3 years & was repeated more than 12 months ago. Of the necessity of the measure I could satisfy you in a few minutes, as well as of the propriety of adhering to it without making exceptions in any case. The fact is that a single dispensation would be equivalent to a total revocation.” Bushrod admitted, “To enforce the rule ag[ains]t any member of your family or the friends of it, is, I assure you my dear Sir, most painful, & I must rely upon your & their Kindest interpretation of my conduct (which I have not now time to explain) for my excuse.” As a case in point, the judge related how he had “lately written on this subject to my Nephew in Congress”—George Corbin Washington, a U.S. senator from Maryland—and refused to sanction a similar party.10 For Bushrod, there was no turning back.

Ultimately, the problem of steamboat visits to Mount Vernon would pass to Bushrod’s successors. The judge died in Philadelphia on Nov. 26, 1829. In an ironic twist, Bushrod’s body was conveyed to the tomb at Mount Vernon for interment, per his orders, by steamboat.11