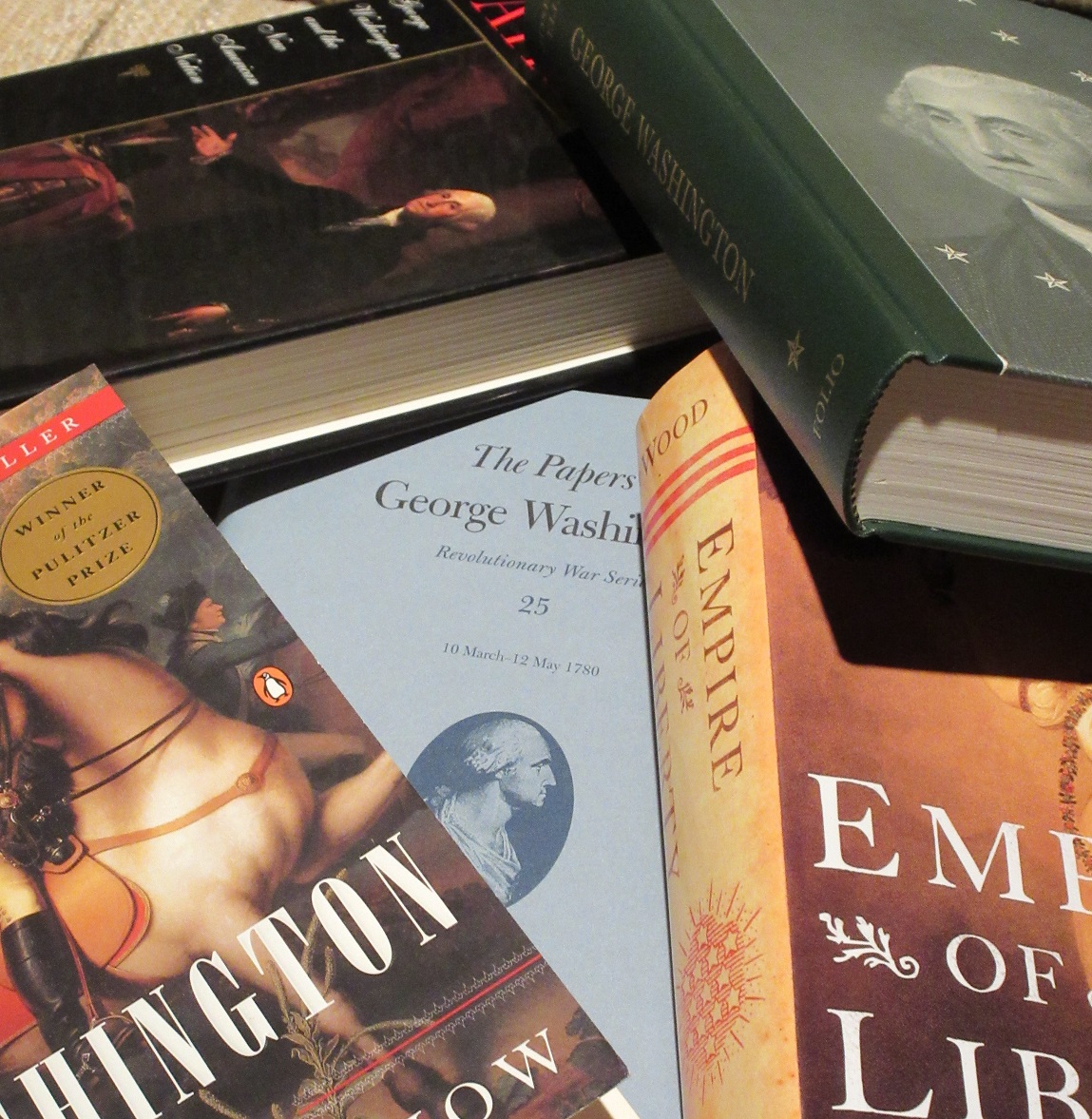 Patience is a noble Virtue, & when rightly exercised, does not fail of its own Reward.

George Washington was not by nature a patient man. Yet he summoned patience when the situation required, and he exemplified that virtue’s close relation—perseverance—throughout his life. General Washington’s patience and perseverance won our independence, and, as president, his exercise of those same qualities established for the new nation a solid footing on which to build a lasting republic.

The Washington Papers project at the University of Virginia begins the new year by celebrating 50 years of patient perseverance in collecting, scrutinizing, and analyzing the documentary bits and pieces that shape our understanding of our nation’s first and greatest hero. As we mark the golden anniversary of the project’s founding as The Papers of George Washington (PGW), perhaps we may be permitted the indulgence of celebrating as well the long-anticipated fruits of our labors. The past 20 years have seen a proliferation of Washington biographies, as well as monographs and treatises on the Revolutionary War and the Early American Republic, whose authors and researchers have found deep scholarship and unprecedented accessibility in the annotated volumes of the PGW edition.

Ron Chernow, whose biography of another Founding Father inspired the groundbreaking Broadway play Hamilton, graciously tipped his hat to the PGW project in the prelude to his 2010 Pulitzer Prize-winning book Washington: A Life. The “new edition of the Papers of George Washington, started in 1968 and one of the great ongoing scholarly labors of our time, has provided an extraordinary window into [Washington’s] mind,” Chernow wrote. “The indefatigable team of scholars at the University of Virginia has laid a banquet table for Washington biographers and made somewhat outmoded the monumental Washington biographies of the mid-twentieth century.”1

Before PGW’s modern, comprehensive editions of Washington’s diaries and correspondence, Washington scholars often looked to the 39-volume correspondence edition produced by John C. Fitzpatrick between 1931 and 1944. Unlike the PGW edition, however, Fitzpatrick’s published only Washington’s outgoing letters, omitting those written to Washington.

Chernow acknowledged that his Pulitzer-winning masterpiece “is based on a close reading” of the PGW edition, which numbered 60 volumes at the time and now has published more than 70 volumes. “Never before,” Chernow added, “have we had access to so much material about so many aspects of Washington’s public and private lives.”2

That Chernow’s cradle-to-grave biography is presented in six parts reflects almost precisely the partitioning of Washington’s life by the PGW project. Chernow’s first two segments—which he titles “The Frontiersman” and “The Planter”—span the years covered in the 10 volumes of PGW’s Colonial Series. Each subsequent segment aligns with a different PGW series: Chernow’s “The General” and PGW’s Revolutionary War Series (26 volumes published to date); “The Statesman” and PGW’s six-volume Confederation Series; “The President” and, of course, the Presidential Series, soon to be complete in 21 volumes; and, finally, “The Legend” and the four-volume Retirement Series. Sprinkled throughout are nuggets sifted from the narrative streams of Washington’s diaries, which PGW published in six volumes, plus a single-volume abridgment that Chernow also cited. The list of citation abbreviations that begins Chernow’s 36 pages of notes includes 10 sources—seven of which are PGW. It seems unlikely that there ever will be, or ever could be, a book that more generously acknowledges the decades-long labors of the scholars, editors, and publishers of this definitive edition of the papers of George Washington.

Renowned historian Gordon S. Wood called Chernow’s book “the best, most comprehensive, and most balanced single-volume biography of Washington ever written,” and he based that assessment in part on his conviction that “the story of Washington’s life has to rest almost totally on his diaries and papers.”3 Wood himself has contributed much to the wealth of historical scholarship and literature of the period, and his considerable accomplishments include a Pulitzer Prize in 1993 for The Radicalism of the American Revolution. With PGW’s Revolutionary War Series still in its early stages at that point, Wood relied on the Fitzpatrick edition. However, he later cited the PGW edition in both his 2006 book Revolutionary Characters and in Empire of Liberty, a Pulitzer Prize runner-up in 2010.

Robert Middlekauff, who cited the Fitzpatrick edition in his 1983 Pulitzer-winner The Glorious Cause, acknowledged the PGW edition as “the principal source” for his 2015 book Washington’s Revolution: The Making of a Leader. “The notes,” wrote Middlekauff, “are extraordinarily full and help make the Papers a magnificent source.”4

Richard Norton Smith, too, was caught between correspondence editions when he published Patriarch in 1993. He used the completed PGW edition of the diaries—”richly annotated” and “easily supersedes” the Fitzpatrick edition, Smith wrote in Patriarch’s notes—and looked ahead to “what promises to be the ultimate in Washington documentation, an exhaustively inclusive collection of correspondence to as well as from” Washington.5

Authors of more recent books have, indeed, reaped the benefits of the modern edition. Along with those previously noted, Joseph J. Ellis, in his celebrated single-volume biography His Excellency: General Washington, called the PGW edition “the meticulously constructed documentary edifice on which this book is based.”6 T. H. Breen called PGW “a magnificent project that is the foundation of all modern Washington scholarship,”7 and John Ferling, who has cited the PGW edition in at least seven books (see list below), has termed both the Fitzpatrick and PGW editions of Washington’s papers “indispensable.”8

Those interested in the life of George Washington have had to practice patience over recent decades as PGW editors have persevered to fulfill their longstanding mission. Next year will mark the completion of the 21-volume Presidential Series, leaving only the Revolutionary War Series—now about two-thirds complete and ultimately to include some 40 volumes—to wrap up the edition. It has, by necessity, been a long time coming. We’re still at it, and we look forward to the yet-unwritten masterpieces that are sure to spring from our remaining volumes.

While certainly not a comprehensive list, the following offers a substantial sampling of the dozens of books, mostly published over the last two decades, that have cited the PGW edition of Washington’s correspondence or diaries:

American Spring: Lexington, Concord, and the Road to Revolution (2014)

The Indian World of George Washington (2018)

The World Turned Upside Down: The American Victory in the War of Independence (1988)

Setting the World Ablaze: Washington, Adams, and Jefferson and the American Revolution (2000)

A Leap in the Dark: The Struggle to Create the American Republic (2003)

Almost a Miracle: The American Victory in the War of Independence (2007)

The Ascent of George Washington: The Hidden Political Genius of an American Icon (2009)

Brothers at Arms: American Independence and the Men of France and Spain Who Saved It (2016)

The Great Divide: The Conflict between Washington and Jefferson that Defined a Nation (2015)

The Washingtons: George and Martha (2015)

Washington’s Revolution: The Making of a Leader (2015)

In the Hurricane’s Eye: The Genius of George Washington and the Victory at Yorktown (2018)

Cincinnatus: George Washington and the Enlightenment (1984)

Empire of Liberty: A History of the Early Republic (2009)