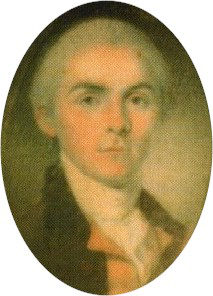 I grew up in Forsyth County, Ga., a suburb of Atlanta. Although I left Forsyth some time ago, I will always be interested in my home county’s history. So, it is a happy circumstance for me that my work here at The Washington Papers occasionally affords an opportunity to indulge that interest.

Recently, while researching the Judicial Act of 1789 through our project’s digital edition, I happened upon George Washington’s appointments for the positions created by the act. At the time, I was interested specifically in one appointee, John Jay. But since I had the document already pulled up, I thought I would go ahead and browse the list of appointees for the state of Georgia. One name in particular caught my eye: Robert Forsyth. Might this be the man who put the Forsyth in Forsyth County?

A simple search said no. He was, however, the father of John Forsyth, the man for whom my home county would be named. Curious, I dug a little deeper. And, boy, did the stories surrounding Robert Forsyth make it worth the effort!

Born in Scotland in 1754, Robert Forsyth relocated to Fredericksburg, Va., a few years before the outbreak of the American Revolution.1 During the war, he served in a variety of positions, including deputy quartermaster general, as well as captain and later major in Major Henry Lee’s Partisan Corps.2 He eventually settled into a position as deputy commissary of purchases for Virginia.3 The new role prompted Washington to write to Forsyth:

I am always sorry to lose a good officer or when the circumstances of his affairs render his resignation necessary—I feel myself however in this instance pleased that we are not to be deprived of your services, but that we are still to enjoy their usefulness in another line of the army—Under this idea I the more willingly at this time acquiesce in your resignation.4

After the Revolutionary War, Forsyth moved to Georgia with his wife, the former Fanny Johnson Houston, and their two children, Robert (b. 1778) and John (b. 1780).5 In 1789, Washington appointed Forsyth marshal for the state of Georgia—an appointment that would prove fateful.6

On Jan. 11, 1794, Forsyth tried to serve civil papers, “from a principle of decency,” to a man named Beverly Allen, “a methodist preacher whose character is as vile as it is possible.”7 Unsurprisingly, Allen did not welcome Forsyth’s arrival. Barricading himself in a locked room, Allen threatened to shoot if Forsyth did not leave. With a loaded gun aimed at the still-closed door, the preacher followed through on his promise. Beverly Allen shot and killed Major Robert Forsyth.8

Soon after being apprehended for killing Forsyth, Allen escaped jail and took refuge in the home of his brother. Thirty men surrounded the home and threatened to set it ablaze. Only after the house was engulfed in flames did Allen apparently emerge. The “allaccomplished [sic] villain” supposedly escaped jail once more, never to be apprehended again.9

And so, without justice, Forsyth’s family was left “to mourn his unhappy fate.”10 Robert Forsyth’s elder son would die just a few years later, but his younger son, John, would lead an auspicious life of his own account. His long political career included stints as a Georgia congressman and governor, U.S. minister to Spain, and secretary of state to presidents Andrew Jackson and Martin Van Buren.11

Robert Forsyth’s legacy may not loom as large as that of his son, but his name still commands respect. He is remembered as the first U.S. marshal killed in the line of duty and was clearly beloved.12 A letter published in a newspaper following his death declared that Forsyth was so “highly revered” and such a “useful and pleasant member of society” that his “removal from this scene of things affords a most striking and instructive lesson of mortality.”13 Similarly, the stone on his grave informs all future visitors that Forsyth “left [an] impression on his Country and friends more durably engraved than this Monument.”14

Words of praise for Forsyth also reached George Washington as eager applicants lauded the man they hoped to replace through presidential appointment. One applicant for Forsyth’s vacant post went so far as to offer his potential earnings to a fund for the Forsyth family.15  Congress soon made a similar gesture when, on June 7, 1794, in “an act to make provision for the widow and orphan children of Robert Forsyth,” it granted $2,000 to Mrs. Forsyth “for the use of herself and the children.”16

Robert Forsyth is still recognized today. In 1981, the U.S. Marshals Service created an award in his honor, which commemorates “a U.S. Marshals Service employee who has demonstrated unusual courage, good judgment, and competence in hostile circumstances, or who has performed an act or service which saved the life of another person while endangering his/her own life.”17