No former editor has eased my research burdens more than Louise Phelps Kellogg, who built a remarkable career as a historian during the first decades of the twentieth century. Her work informs some of the most consistently challenging letters sent to George Washington: those from Colonel Daniel Brodhead, who commanded the western department from Fort Pitt during the Revolutionary War‘s middle years. What makes Brodhead’s missives so problematic is that they cover a vast swath of frontier that ranges west across present-day Ohio to the upper Mississippi River Valley, north to Detroit, and east to the Appalachians, extending south into what is now West Virginia. Kellogg’s annotations in four documentary volumes cover an astounding percentage of obscure geographic and event references in Brodhead’s correspondence.1 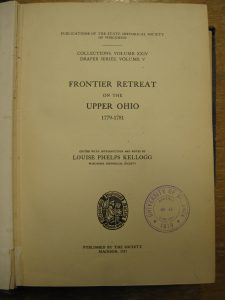 A notable example can be taken from a document in the forthcoming volume 25 of the Revolutionary War Series. In a letter to Washington dated April 24, 1780, Brodhead enclosed a report from a recent Delaware Indian council and noted how other Indians had “destroyed a number of Horses & Cattle in Tyger Valley.”2 Thanks to a Kellogg volume, I quickly found the text of Brodhead’s reply to the Delaware council (in which he refers to Washington as “our great Warrior”).3 From another Kellogg volume, I learned that “Tyger Valley” was a location properly known as Tygart’s Valley, or Tiger Valley, and situated along the east fork of the Monongahela River in modern Randolph County, West Virginia. The name honored David Tygart, whom Indians drove from the valley in 1753.4 Research that might have consumed hours or days of tediously scanning microfilm instead took minutes!

Kellogg became a historian later in life. She was born in Milwaukee to educated and religious parents and was raised in Evanston, Illinois, as an only child after the death of her infant sister. As a young adult, she attended Dearborn Seminary in Chicago and then graduated from Milwaukee College in 1882. Kellogg taught at private schools for more than a decade before entering the University of Wisconsin-Madison in 1895 with junior-class status. She received her bachelor’s degree in 1897, studied in Europe for a few years, and returned to the University of Wisconsin, where she earned a Ph.D. in American history under the direction of the legendary Frederick Jackson Turner. Her dissertation, “The American Colonial Charter: A Study of English Administration in Relation Thereto, Chiefly After 1688,” won a prestigious award from the American Historical Association.

Kellogg then took a research position with the State Historical Society of Wisconsin. She remained with that illustrious institution for her entire career, teaming with its executive director Reuben Gold Thwaites to produce documentary volumes. Kellogg’s many authoritative publications on the Old Northwest eventually made her the historical society’s most prominent historian. She extended her influence and renown by encouraging the efforts of younger women historians and by actively engaging with temperance, suffrage, and other social reform groups. Professional historians acknowledged Kellogg’s contributions by electing her in 1930 as the first female president of the Mississippi Valley Historical Association (a precursor to the Organization of American Historians). It would be more than 40 years before another woman would serve as president. Kellogg also played a prominent role on the nominating committee of the American Historical Association.5

Kellogg devoted her life to research, education, mentoring, and advocacy. Her editorial scholarship retains value more than a century after its original publication. The same standards of excellence and endurance guide all editorial work at The Washington Papers.