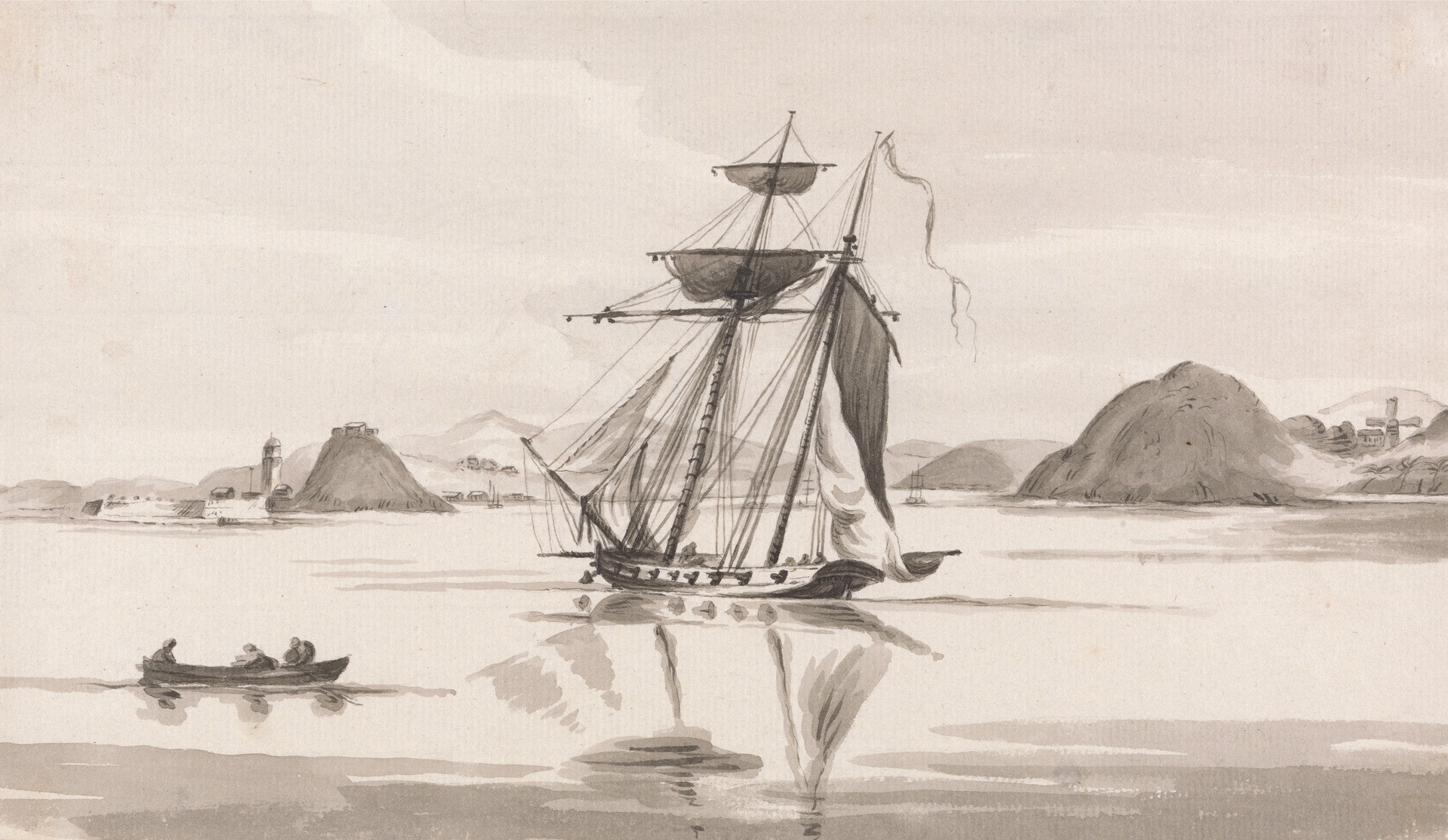 William Fairfax was the superintendent of Lord Fairfax’s estates in Virginia and a powerful landowner in his own right. He resided at Belvoir, only a few miles from Mount Vernon.1 Teenage George Washington frequented the house and found a patron and mentor in Fairfax. Why the invalid Lawrence decided to sail to Barbados in the fall of 1751, and George decided to accompany him, had much to do with the influence of William Fairfax. Fairfax was related by marriage to the eminent Clarke family on the island, with whom the Washington brothers would spend most of their time. It was Fairfax’s connection with Carlyle, however, that likely prompted when and how the Washingtons got to Barbados. He owned a ship, and she was about to set sail.

The question of George Washington’s departure for Barbados—the specific date, vessel, and port from which he and Lawrence sailed—has long puzzled readers of the small, timeworn diary that he left in the voyage’s wake. Without citing his source, Joseph Toner, the editor of the first and only complete transcription of the manuscript in 1892, claimed that while missing pages had taken away any possible mention of when and from where the brothers sailed, “Collateral records, however, in part supply this data and inform us that they took shipping on the Potomac river and sailed on the 28th of September, 1751.”2 Except for the tiny fragment written by George himself on that date, external sources have yet to be traced that explicitly convey this information.

In fact, the diary itself proves that September 28 was not the departure date. Latitude and longitude estimates that George recorded on the succeeding day place the ship halfway to Bermuda by the 28th. As for the port, surviving Naval Office shipping lists from the six major ports in Virginia,3 along with the ship news related in the Virginia Gazette, give no obvious answer.

When The Washington Papers published the facsimile edition of the Barbados diary in 1976, editors Donald Jackson and Dorothy Twohig made a convincing, though rather bold, claim. “If the vessel did sail from the Potomac, it was the Success, Jeremiah Cranston, 40 tons, 8 men, carrying a cargo of 4,480 barrel staves, 7,627 feet of plank, 984 bushels of corn, and 31 barrels of herring.”4 From their close examination of the shipping lists for the South Potomac customs office, it was clear that only one vessel sailed from there to Barbados within an appropriate timeframe to put the brothers at sea by September 28. Nonetheless, there was some confusion about the sail date. In the records it appears simply as the “23d,” written in a column headed “August” but contained on a sheet that runs till the end of September. A delay after clearing port was not unusual before entering the river, the editors argued, if, in fact, the vessel did sail in August.

Historically speaking, it was this fluid sail-date that stood as the only detail in favor of the Success as the Washingtons’ departure vessel. Closer examination, however, reveals that Jackson and Twohig were most likely correct in their conclusion. One clue from the South Potomac shipping lists that went unmentioned in the 1976 volume was that the owner of the vessel was “John Dalton & Co.”—Carlyle’s business partner. Other sources confirm that the Success was a brigantine (not a sloop, as the editors claimed), which more closely aligns it with George’s own description of the vessel in the diary.

John Dalton had been in partnership with William Fairfax’s son-in law, John Carlyle, since 1744. George Washington later referred to the Alexandria merchant as his “good Friend Dalton.” He and Carlyle, who was appointed Commissary of the Virginia forces in 1754, would become George’s suppliers during the French and Indian War. 5

Prior to her fall voyage, the Success made a trip to Barbados and returned to the South Potomac in May 1751 with a cargo of rum, sugar, and molasses—as well as sixteen slaves. Accounts from voyages between the island and Virginia in 1752 identified her as a “brig” that also occasionally carried passengers. She was built in 1746 in the New England town of Hanover (likely the shipbuilding town of Hanover, Massachusetts) and was registered in Virginia at the South Potomac customs office on November 30, 1749. Her owners are alternately identified as “John Dalton & Co.” or “John Carlyle & Co.”—never “Dalton & Carlyle”—but it is clear that they were co-owners. When the partners sold “the Hull, which is laid up, and all the Materials of the Brigantine Success” at the end of November 1753, they co-signed the advertisement, noting that “her Rigging, Sails, and Ground Tackle, are in general good; an Inventory of which may be seen, at the said [Joseph] Chew‘s, or in the Hands of Carlyle and Dalton.”6

This reference to the Success as a brigantine joins another made by John Carlyle in a letter to his brother in 1752. In August of that year, Carlyle wrote that one of the ship boys “Takes So great A Likeing to the Sea that I cou’d not Engage him to Live on Shore[.] his [he’s] now In Barbados In our Brigantine Success.”7 According to the Virginia shipping lists, the Success had left the South Potomac for Barbados, again under the mastership of Jeremiah Cranston, on July 6, 1752.

Interestingly enough, in the fall of 1751, George Washington described sailing on a vessel that closely resembles a brigantine, or a two-masted ship rigged with both square and fore-and-aft sails. He mentioned the “Stay Sa[il],” the “Gib,” the “foresail,” the “main topsail,” and multiple “masts.” He referred to the processes of righting, refitting, handing, crowding, reefing, and double-reefing the sails. Furthermore, a close analysis of the prevailing winds and the vessel’s predominant course as recorded faithfully by George in his ship’s log—directions typically perpendicular to each other over the five-week voyage—imply a “hermaphrodite” brig: in other words, one that is both square- and fore-and-aft-rigged.8

From family connections and business networks to quiet clues in newspapers and naval records, the case for George Washington’s sailing on the Success is even more compelling than it was forty years ago. New questions arise: Were the Washington brothers simply passengers aboard ship, or were they treated as special guests of the owners? Would they have had to pay for their passage, in full or at all? Although distance and time separate us from the past, the process of putting the pieces back together again makes editing historical documents a continuous and rewarding adventure.

1. For the family genealogy and an account of William Fairfax (1691–1757), see Edward D. Neill, The Fairfaxes of England and America in the Seventeenth and Eighteenth Centuries: Including Letters from and to Hon. William Fairfax, President of Council of Virginia, and His Sons Col. George William Fairfax and Rev. Bryan, Eighth Lord Fairfax, the Neighbors and Friends of George Washington (Albany, N.Y.: J. Munsell, 1868), [45], 49–50.
2. Joseph M. Toner, ed., The Daily Journal of Major George Washington, in 1751–2, Kept while on a Tour from Virginia to the Island of Barbadoes, with his invalid Brother, Maj. Lawrence Washington, Proprietor of Mount Vernon on the Potomac (Albany, N.Y.: Joel Munsell’s Sons, Publishers, 1892), 5–6.
3. Available on microfilm from the Public Record Office: CO 5, Naval Office Shipping Lists for Virginia.
4. Donald Jackson and Dorothy Twohig, eds., The Diaries of George Washington (6 vols.; Charlottesville, Va.: University of Virginia Press, 1976–79), 1:26.
5. W. W. Abbot et al., eds., The Papers of George Washington, Colonial Series (10 vols.; Charlottesville, Va.: University of Virginia Press, 1983–95), 1:63, 229, 274.
6. Maryland Gazette, 20 Dec. 1753.
7. John Carlyle to George Carlyle, 4 Aug. 1752. Printed in J. F. Carlyle, ed., The Personal and Family Correspondence of Col. John Carlyle of Alexandria, Virginia, [2011], available here.
8. I am indebted to Jason Lunze for guiding me along this line of inquiry.