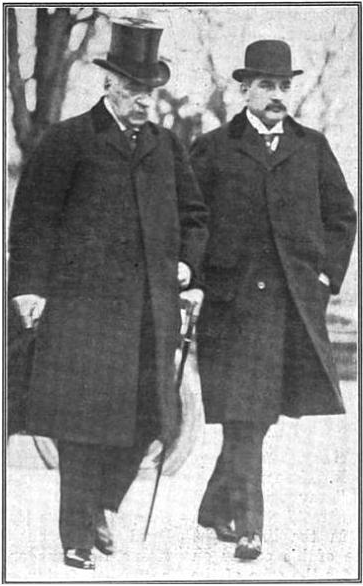 For the past few months, I’ve been searching for Martha Washington documents that have been printed or referred to in newspapers. So far as I have seen, only once in the years between her life and the present day has there been a press furor over Martha. The key players included a Civil War brigadier general, finance giant J. P. Morgan, the Daughters of the American Revolution (DAR), the state of Virginia, and the United States Supreme Court. The time frame: the Civil War and World War I.

The object of contention? Martha’s will.

After she passed away in 1802, Martha’s will, located in the Fairfax County Courthouse, should have stayed there forever along with George’s will. However, a Civil War soldier, Brevet Brigadier General David Thomson, had different ideas. For his own inscrutable reasons, he took the will from the courthouse in 1862. It seems to have been common for Civil War soldiers to take, keep, and pass on valuable documents for as we’ll see, Martha’s will wasn’t the only such case.

Shortly before his death, Thomson passed the will on to his daughter, Mary.1 Here, as far as I have seen, the first whisper of the incident reached the papers. An article dated January 26, 1892 reads that the will “is now in possession of a woman who lives in the central part of New York, and who says her father took it from Fairfax. She wants to sell it for $3,500.00.”2

It ended up being purchased by none other than banking giant John Pierpont Morgan, Sr. Indeed, the will went up for sale just as Morgan began to assemble what would become a famous library and art collection.3

An unnamed Washington attorney got wind of the purchase, and as a result Morgan, Sr. was sent several letters asking for the will to be returned to the people of Virginia. Morgan replied that the will was contraband of war and that he had a right to keep it.4 Then, for whatever reason, it seems the issue was dropped—temporarily.

It probably isn’t a coincidence that the real clamor arose over the will shortly following Morgan, Sr.’s death on March 31, 1913. Was John Pierpont Morgan, Jr. less intimidating than his father? In any case, Mrs. John S. Barbour, the regent of the Falls Church Chapter of the DAR, decided that the time was ripe to regain the will. She wrote asking Morgan, Jr. to return it to the people of Virginia. She received a polite decline through Morgan’s librarian, Belle Dacosta Green.

As a result of Morgan’s repeated refusals to give up the will unconditionally, the newspapers, particularly in Virginia, painted him as a villain for the next year. In all fairness though, Morgan did suggest several compromises to resolve the issue. He offered to send the DAR photographs of the will, asking that they send him photographs of George’s will in return. Later, in 1914, he said that because he didn’t trust the fire-proofing of the Fairfax County Courthouse, he would give the will to Mount Vernon if the courthouse would give George’s will to Mount Vernon as well.5 He then offered to give the will to the Library of Congress, apparently because it would be accessible to more people there.6

As the debate over who should have the will evolved, it became a question of whether the document should be considered personal property purchased in good faith or whether it was a stolen good that needed to be returned. Many felt that the most honorable thing for Morgan to do would be to return the will unconditionally without a court order. One article remarked, “one would think that even a poor man would be ashamed to hold on to stolen property in this way, and especially to the will of the wife of the Father of His County.”7 On the other side, it was claimed that the will was visible to all in Morgan’s library and that the document did not warrant such an uproar since it was not of great consequence anyway. In this vein, the president of the Virginia Historical Society called efforts to regain the will from Morgan “tom-foolery.”8

Clearly though, Martha’s will was of consequence not only because of its historic and sentimental value but because it highlighted ambiguities in the distinctions between stolen goods and personal property. For Martha’s will was not the only such contentious case at the time.

The popular 19th-century historian, Benson J. Lossing, owned a group of documents, including letters of George Washington and Lafayette that had been stolen by Civil War soldiers. Lossing passed these letters on to his heirs.9 The Virginia state librarian, seeing that Morgan was not going to give up Martha’s will without a fight, feared he would also have to go through the courts to get the Lossing documents back. However, in June 1914, the matter was resolved. The heirs asked only that they receive compensation for taking care of the documents for the past 50 years. An article compares the Lossing heirs with Morgan, declaring that “Mr. Morgan, who has in his possession the Martha Washington will…is still haggling over [its] return, imposing conditions that cannot be accepted. The thanks of the State are due the Lossing heirs; the State must fight Morgan.”10

As a counterpoint, Edward C. Eggleston of New London, Connecticut, heard about the furor over Martha’s will and realized he too owned a will that had been stolen by Civil War soldiers from the Fairfax County Courthouse: the will of Hannah Washington, George Washington’s sister-in-law. In contrast with Morgan and Lossing’s heirs, he believed he had no right to the document  or to any compensation and simply returned it to Virginia.11 Eggleston would also be held up as an example for Morgan to follow: “Mr. Eggleston should and does receive the thanks of Fairfax County and Virginia, both of whom only wish that they could get the opportunity to say about Mr. Morgan the nice things they think of Mr. Eggleston.”12

These various issues cropping up at the same time indicated, as one article put it, that a definite ruling was needed from an entity no less than the United States Supreme Court “as to the rights to relics of art, history, literature, etc., and concerning the ethics of loot.”13 Indeed, in March 1915, the governor of Virginia formally requested the will be returned, and a bill was passed allowing the state of Virginia to sue Morgan if he refused to give it back.14 Which he did, again.

Thus, John Pierpont Morgan, Jr. received a subpoena from the United States Supreme Court. The suit was not the only thing on his plate though—he was deeply involved in the finances of World War I. A May 10, 1915 article explains that as soon as Morgan stepped off the boat from a trip to Europe, reporters besieged him with questions about the Lusitania disaster, his loans to war-torn England and France, and his reaction to the suit concerning Martha’s will practically in the same breath. Morgan refused to discuss his financial negotiations and added that he would be ready to go to court over Martha’s will whenever they wanted him to.15

It isn’t yet clear to me what happened to change Morgan’s mind, but in September, he abruptly gave in and returned the will unconditionally to Virginia. As a result, the suit against him was terminated.16 In October, a full-page series of articles on the will was published, featuring facsimiles of the will’s first and last pages. The headline reads in part, “Carefully Guard Will of Martha Washington; Fairfax Officials Protect it as Jealously as Crown Jewels of England.”17

Today, the will is safely at the Fairfax County Courthouse. You can see both a transcription of the will and scans of the original here.

Besides the fact that the battle over her will is an interesting story, there are some unusual things about it. Martha is usually mentioned in newspaper articles in conjunction with George. Interestingly though, in these stories about her will, George is hardly mentioned—Martha’s will is portrayed as a valuable document in its own right. Additionally, as far as I have seen, this is the longest-running story that there has ever been, even during her own lifetime, about Martha or one of her documents.

There are many questions yet to answer concerning this case and its significance. What ramifications did the battle for her will have on the “ethics of loot?” Why did Civil War soldiers take these valuable documents in the first place? Why did Morgan change his mind and return the will? Why is this particular incident concerning Martha the one that made the biggest splash in the papers? I hope to find out more as I continue to get to know Martha, her documents, and her impact on American culture.

4 thoughts on “The Battle for Martha Washington’s Will”