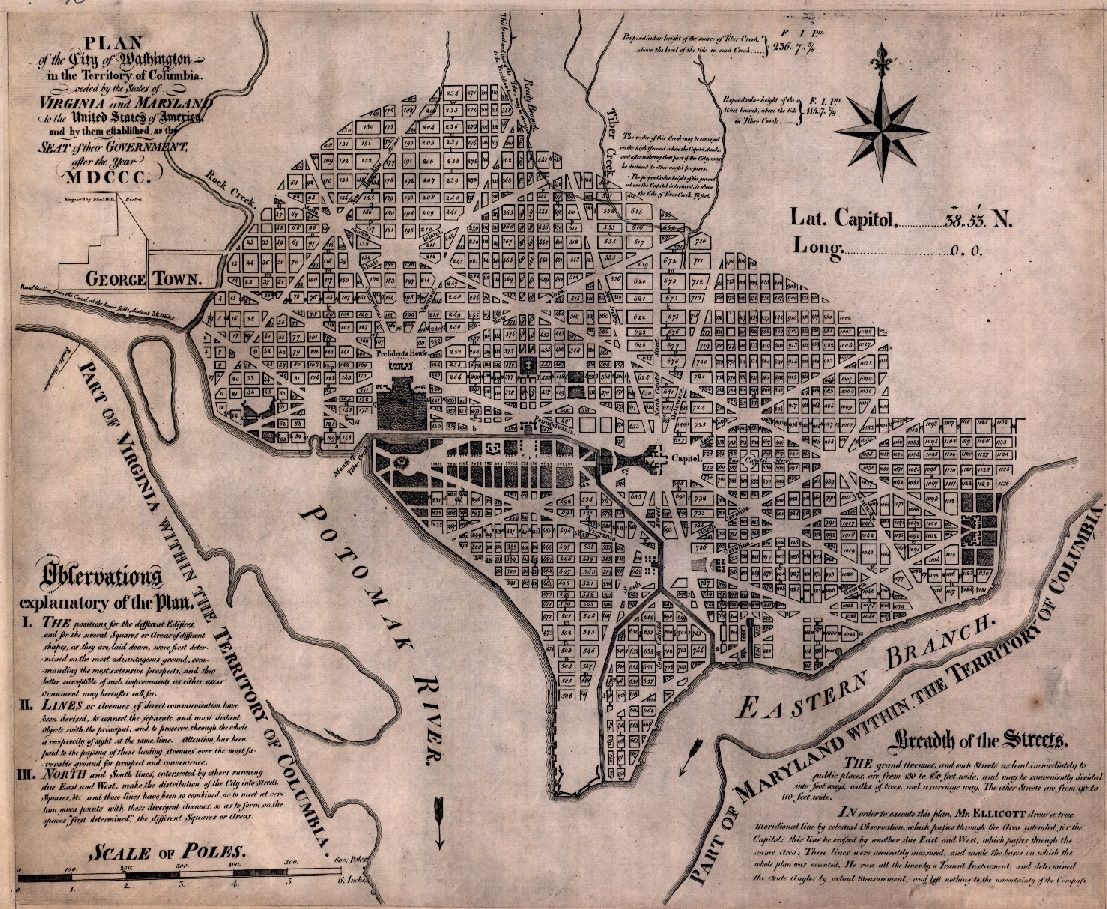 George Washington has loomed large in my professional life, even though I only joined The Washington Papers’ full-time staff in 2017. This is because my work as an editorial assistant during graduate school on Presidential Series volumes 13 and 14 led me to my dissertation topic. One of Washington’s last great projects was founding the city named in his honor: the capital of the United States, Washington, D.C. George Washington’s role in creating the place that 18th-century Americans called “the federal seat of government on the Potomac” is largely forgotten today, but this work consumed a great deal of his time and energy during his presidency. He believed the new capital would play a vital role in building and integrating the young and fragile American union, and thus, he considered it a big part of his legacy. As a result, Washington was significantly involved in many of the smallest details and decisions associated with planning and financing the city’s construction.

The extent of Washington’s involvement is most obvious in his correspondence with the Commissioners for the District of Columbia over building regulations and property sales. This presidential commission was created by the Residence Act of 1790 and tasked with constructing buildings for the federal government’s planned move from Philadelphia to the Potomac in 1800. Competition in Congress over the location of the federal seat had been fierce, and as a result, Congress refused to provide funding for construction. In the absence of Congressional support, the city’s founders decided that selling city lots would be the most effective way to raise the money needed to build the Capitol and President’s House. This meant that the price at which lots sold was a major concern for the city’s founders, who consequently worried over everything from the heights of buildings and the width of streets, to the distances of those buildings from those streets and the materials used to construct houses in the city.

When I started working on the Presidential Series, I was not aware of the funding challenges the Potomac project faced, so the extent of the interventions by the President of the United States in the building process seemed noteworthy or even a bit strange. Some of the many examples include the following letter, in which Washington addressed the commissioners’ concerns (in quotation marks) about proposed changes to Peter (he preferred Peter) Charles L’Enfant’s original city plan:

With respect to the first alteration proposed vizt—”to stop S. Carolina Avenue, west of South Capitol, at the public appropriation”—I am perfectly of opinion with you, that the reason given therefor appears sufficient to warrant it. And as to the second—”to change the place of a small canal or inlet from the Eastern Branch, from fifth Street east—where it is marked out on the plan—to sixth street”—seems to be very proper for the reasons assigned by the Surveyors; And if, as they say, the ground on fifth Street, where the Canal is marked out, is high—and that in sixth Street the tide already flows nearly the whole distance of the intended Canal, I think there can be but little doubt of its having been originally intended to be in sixth street, but was missed in laying down the work.1

And this letter from Washington to the commissioners on recommended alterations to city-construction regulations:

I wish, however, you had declared that so much of the stone walls, on which the railing in the street is to be placed, as shall appear above the pavement (or surface of the ground before it is paved) should be of free-stone hewed. The presumption I grant is, that no person who would go to the expence of an Iron-railing, on a Wall, would fix it on rough stone; still, the altered article does not prohibit the measure; and as it is better to prevent disputes than to encounter them, the insertion of a word or two may obviate a plea that a good wall may be composed of foundation stone equally with any other stone.2

After I understood the reasons behind Washington’s concern over the details of city construction, I became curious about the success of this financing scheme. I subsequently started a study of the sale prices of lots and the distribution of their ownership. I created a database of lot owners and property values using tax and deed records, and then analyzed and illustrated this data using geographic information system (GIS) software. Later research led me to conclude that actual lot sales were only one part of the eventual success of the Potomac building project. From this material, I also learned some interesting insights about early Washington, D.C., the valuation of urban property in the early republic, and the significance of infrastructure improvements in determining patterns of city settlement.

With more research (including with The Washington Papers), the focus of my dissertation shifted to different questions about the political and economic development of the early United States. But it was those seemingly strange letters by George Washington filled with minutiae on the sale and development of city lots, blocks, and streets that pointed me to a bigger story about the political economy of early America.