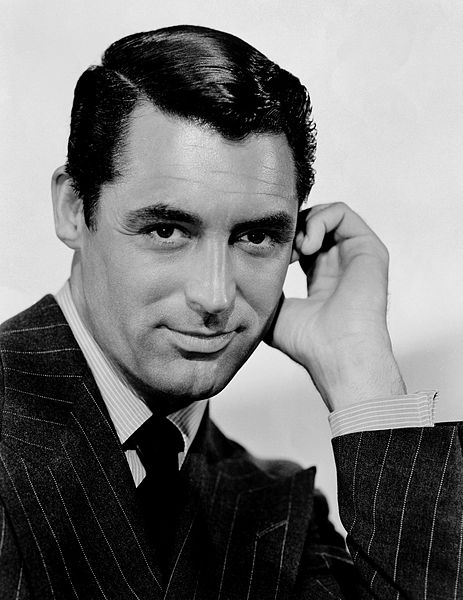 “To play yourself—your true self—is the hardest thing in the world to do.”
-Cary Grant1

“What do you do with a film degree? Sit around and watch movies all day?” As a graduate of New York University’s Tisch School of the Arts, where I earned an M.A. in cinema studies, I’ve heard my share of these questions from people I meet. They may have a point; although my cinema studies degree has helped me develop my research and writing skills, it’s hard to justify how this degree directly applies to my job at The Washington Papers. When I say I’m a documentary editor, I don’t mean that I edit documentary films! So, I’m going to approach this blog post from a different angle (with a little help from my psychology degree), and show how George Washington shares attributes with classic film star Cary Grant.

Now, bear with me. When I attended NYU, my research interest was the concept of star persona or in other words, how an audience perceives a movie star on- and off-screen and how that star may have gone about creating that image for public consumption. I wrote a paper, for a class on Alfred Hitchcock and his movies, about the meaning and creation of Cary Grant’s star persona.2 As I’ve studied George Washington at The Washington Papers, I’ve noticed how he also proactively developed his public image.3

Neither Cary Grant nor George Washington received a formal education, an important means of career advancement. As a result, both men transformed their public images and, in turn, themselves into what they wanted to be. And so, according to film critic Richard Schickel in his book Cary Grant, Archie Leach, an English boy from a lower-middle class background, became a high-class, worldly gentleman named Cary Grant. In The Invention of George Washington, Paul K. Longmore contends that Washington started out as a militia officer who wasn’t “British” enough and changed himself into a truly American military and political leader. I would argue that the respective public images of Cary Grant and George Washington are characterized by an emphasis on impeccable clothes, appearances, and manners; a seemingly effortless physical grace; and a sense of reluctance or disinterestedness, which is actually a form of power or authority.

Cary Grant was primarily known by movie audiences for his flawless style. In his films, Grant is usually wearing a suit and tie, and there always seem to be a party scene in order to showcase him in a tuxedo.4 To citizens of the 18th century, a person’s outer flawlessness reflected inner merit.  For example, Washington was very meticulous when ordering clothes to make sure they fit well and properly served the occasion in question.5

Good manners were also a hallmark of Cary Grant’s public image. Likewise, Washington not only knew how to conduct himself in social settings, but as a boy, he hand-copied the Rules of Civility and Decent Behaviour in Company and Conversation. The Rules of Civility included principles that Washington (and Grant) demonstrated in his public (and probably his private) life, especially consideration for and proper conduct toward others.6

At the age of 14, Cary Grant (then known as “Archie Leach”) left home to join a boys’ acrobatics troupe, which performed stage shows for paying audiences. Young Archie learned how to dance, tumble, stilt-walk, and mime, skills that would lend themselves to his physical work in comedy films, such as Bringing Up Baby (1938).7

George Washington showed this same sort of physical prowess in his dancing and horseback-riding skills. “[Washington’s] physical grace was an important part of the personal presence that from early on vividly impressed those who met him. Once again, the ethos of honor took external appearances as a sign of inner merit.”8 Both Grant and Washington made their physical skills look effortless and natural, a reflection of each one’s inherent talent and worth.

Several of Cary Grant’s films turn the traditional romantic plotlines on their heads. Grant doesn’t pursue the female character; instead, he is pursued by her. Although at first glance, this inversion might seem to make appear Grant weak, it in fact gives him the upper hand in the power dynamic.9 According to film critic Pauline Kael, “Cary Grant must be the most publicly seduced man the world has known… The little bit of shyness and reserve is pure box-office gold, and being the pursued doesn’t make him weak or passively soft. It makes him glamorous and since he is not as available as other men, far more desirable.”10

While Grant used disinterestedness to maintain romantic power, Washington employed the similar tactic of reluctance to cultivate political power. According to Longmore, Washington used this strategy when seeking command of the Continental Army, a seat at the Constitutional Convention, and two terms as president. “He protests his inadequacy. He avoids actively soliciting the job. And finally, by making the offer come to him, rather than promoting himself, he increases his influence and authority.”11

All the world’s a stage,
And all the men and women merely players;
They have their exits and their entrances,
And one man in his time plays many parts,
His acts being seven ages.12