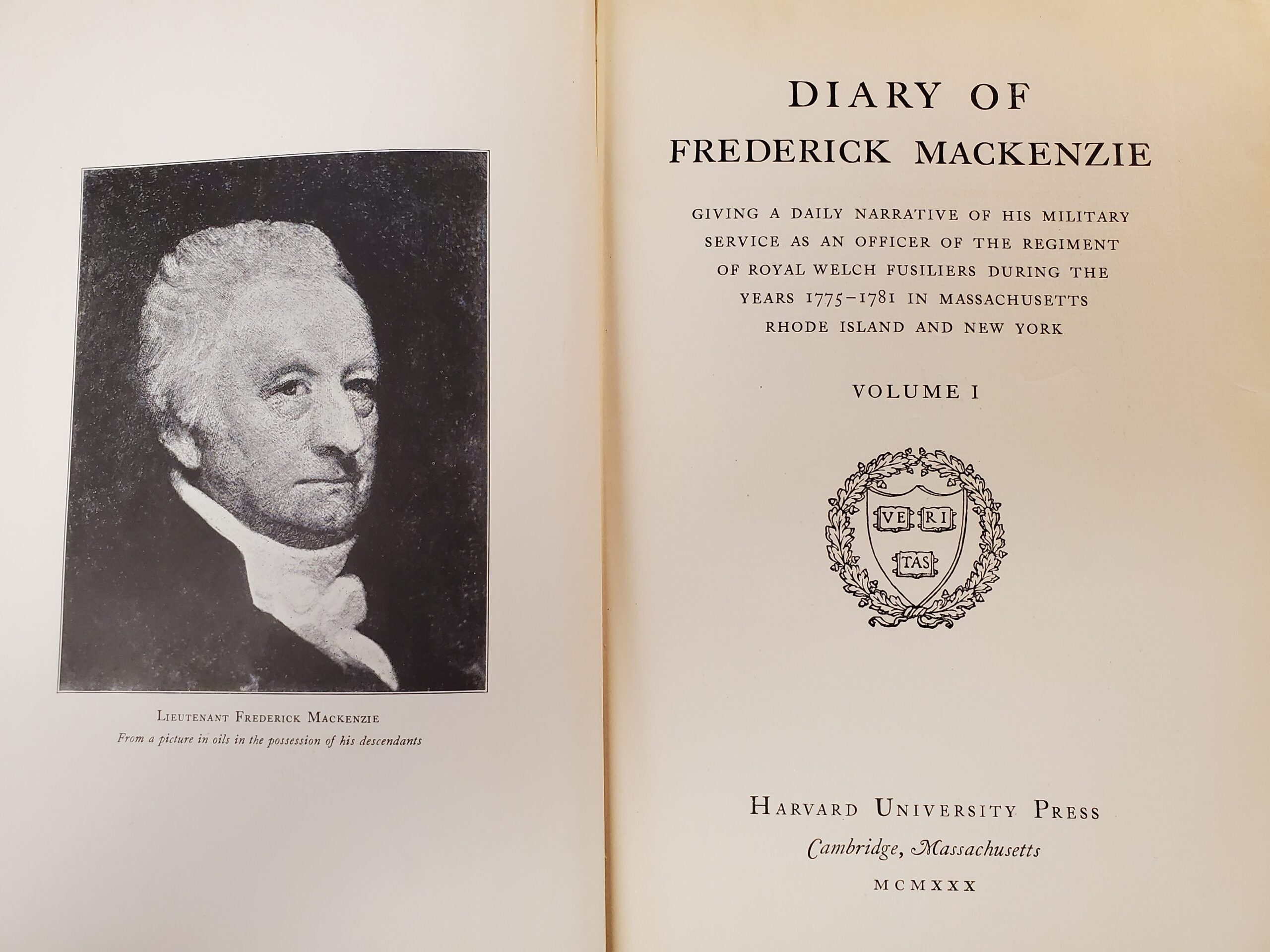 Washington’s own diary, which he kept between May 1 and Nov. 5, 1781, is by far the most important resource for these volumes. I have written about Washington’s “war diary” in this blog.

We also make extensive use of a diary recorded by British officer Frederick Mackenzie, who was often present in New York City, the location of the headquarters of the British commander in chief. Harvard University Press published the diary in two volumes in 1930 as Diary of Frederick Mackenzie Giving a Daily Narrative of His Military Service as an Officer of the Regiment of Royal Welch Fusiliers during the Years 1775–1781 in Massachusetts, Rhode Island and New York. The editors employ the diary as a primary source for information on the activities and movements of British forces in the New York City area, as well as for information on weather and espionage operations. Two examples, as detailed below, illustrate the diary’s usefulness in these areas.

Clear fine weather. Strong gale of wind at W. from 10 ’till 4 this day. The wind fell towards night. The Vulture [a ship] went down to Sandy hook this Morning. The Expedition fleet, with the troops under the Command of General Phillips, sailed this afternoon at 5 oClock. The whole were safe over the bar at 6, and having got together to the amount of 36 sail, at 7 oClock made sail with a fine wind for The Chesapeak. If this wind continues for two days the fleet will have reached the Capes of Virginia.

In his entry for March 31, Mackenzie gives details of an operation designed to glean intelligence from the mail sent by Washington and others to the Continental Congress in Philadelphia:

A Rebel Mail going from the Eastward to Philadelphia, was brought in this Morning by Lieut John Moody of the 4th Battalion of New Jersey Volunteers. He went from hence for this very purpose the 25th Inst and after traversing the woods and Mountains with two other men and a guide, & being four days concealed near New Windsor [current location of Washington’s headquarters], he at last intercepted the Post boy with the Mail on the 29th, about 5 miles from that place, and brought them safe in. Mr Moody received 100 Guineas for executing this enterprize. This Mail contains a great number of letters, amongst which are several from Mr Washington, from whence no doubt The Commander in Chief has received very material information.

The third invaluable resource for annotating the correspondence in volumes 31 and 32 is a journal kept by Captain Ludwig Von Closen, an officer of the French Royal Deux-Ponts Regiment and an aide-de-camp to Lieutenant General Rochambeau (the commander of the French army in North America). Evelyn M. Acomb has translated and edited Closen’s journal, and The University of North Carolina Press published it in 1958 as The Revolutionary Journal of Baron Ludwig Von Closen 1780–1783. Just a small sampling of Closen’s entries during the period covered by these volumes attest to the value of the journal for our editing work.

In an apparently backdated entry for May 30, 1781, Closen reveals how the French commanders, Rochambeau and Admiral de Barras, thwarted Washington’s wishes in an important aspect of military operations:

After M. de Barras yielded to the entreaties of M. de Rochambeau, a mixed council of war, consisting of general and higher officers of the army and navy, re-assembled on June 2 and decided that the last 150 men would be landed immediately, and that the fleet would not leave at all, despite the fact that at the Hartford conference, Generals Washington and Rochambeau had agreed that it would sail to Boston when the army left Newport. This change of plan, which was not known to General Washington, led to a little coolness between the 2 army leaders, but it was very soon dissipated.

In his entry for July 3, Closen describes part of the march of the French army, then en route to join Washington’s army in Westchester County, New York. The entry gives the editors specifics on the march:

On the morning of the 3rd, the 1st Brigade marched to North Castle by a fine road, through rather open country. The Second Brigade joined us there in the afternoon; it came straight from Ridgebury, leaving Bedford on its right, and thus made 25 miles. The Saintonge regiment marched 7 days consecutively without a rest. It would be impossible to march in better fashion or to show more zeal and good will than our entire army is displaying.

In his entry for July 4, Closen provides an eyewitness description of the soldiers of the Continental army, including its Black soldiers:

On the 4th, M. de Rochambeau sent me with Colonel Cobb to find General Washington, whom we joined in White Plains, where his army was resting, while he was selecting a camp site there. White Plains is a certain district containing only some hills and wasteland, almost uninhabited and full of heather and thorns. I had a chance to see the American army, man for man. It was really painful to see these brave men, almost naked, with only some trousers and little linen jackets, most of them without stockings, but, would you believe it? very cheerful and healthy in appearance. A quarter of them were negroes, merry, confident, and sturdy.

Although these are three of the most-used diaries in our editing work, they are far from being the only ones consulted. For example, we also use the diaries of Hessian army officer Johann Ewald, Philadelphia resident Elizabeth Drinker, German officer Carl Leopold von Baurmeister, and American Continental army officer Henry Sewall, just to name a few. Memoirs of Washington’s contemporaries, such as British commander in chief Sir Henry Clinton, American general William Heath, and William Smith, the royal chief justice of New York, are also very valuable. All of these primary sources help us contextualize Washington’s correspondence.