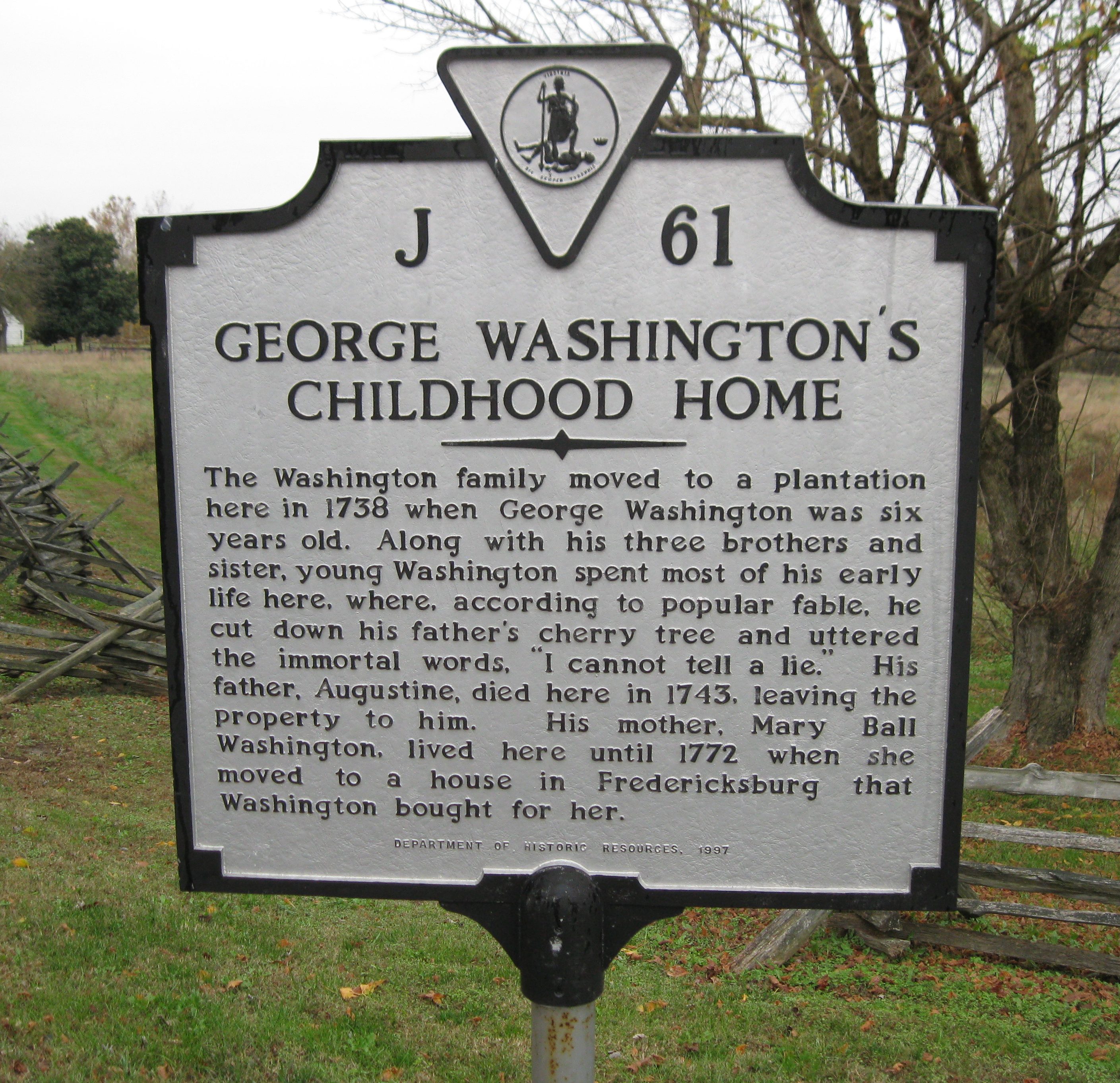 Having shepherded “George Washington, Day-By-Day, 22 February 1732-14 December 1799” into existence as a website featuring information on Washington’s daily whereabouts and activities, and eager to learn more about his early life when documentary evidence is scant at best, I very much looked forward to visiting Washington’s childhood home bordering the Rappahannock River directly across from Fredericksburg, Virginia. This visit finally occurred on Monday, November 9, as a prelude to my attendance at a lecture on James Monroe as a military commander that evening (the immediate reason for my trip from Charlottesville).

I knew a fair amount about the site from a careful reading of Philip Levy’s Where the Cherry Tree Grew: The Story of Ferry Farm, George Washington’s Boyhood Home (St. Martin’s Press: New York, 2013). An archaeologist, Levy produced a fine, nuanced account detailing the people who used or inhabited the land from prehistory to the early 21st century. Despite the excellent qualities of this work, seeing the property now known as Ferry Farm sparked unanticipated thoughts and discoveries.

The George Washington Foundation operates Ferry Farm along with Historic Kenmore, the stately brick home in Fredericksburg of Washington’s brother-in-law Fielding Lewis, who married his youngest sister Betty Washington. The foundation has repurposed a multi-story brick building constructed during the 1960s as a home for wayward boys (see Levy, pages 170-73, for an overview) into its visitor’s center, exhibition area, and research space. Most of the research focuses on more than 700,000 cultural artifacts that digs have unearthed over the years. Most items come from the Native Americans, but the number connected to the Washington family is quite significant. George’s mother, Mary Ball Washington, lived there for nearly 35 years, from 1738 to 1772.

I did not have time to delve into the archaeological finds because my priority was walking the ground near the home site finally pinpointed in 2008 after years of inaccurate speculation and guesswork. The site managers had roped off the roughly 52′ by 30′ rectangle where the home stood preparatory to starting the rebuilding of the Washington home upon getting final approval from Stafford County, Virginia, officials.

My tour benefited from commentary by Dave Muraca, director of archaeology for Ferry Farm. He pointed out how the front of the house, which faced the river, sat on the crest of a steep hill. Stonework along the exterior of the foundation made the house appear more imposing from the water by suggesting a two-story dwelling when in fact it was only one-and-a-half stories. Later 19th-century owners repurposed these foundation stones to support a small shed that dates to about 1870 and is now the oldest standing structure on the property.

What caught my eye, however, was the length and severity of the slope that would have confronted George or any person who stepped out the front door. The hill ran at least 40 yards before leveling off some 45 or 50 yards from the river bank. It struck me immediately that the location of Washington’s boyhood home fully explained the wondrous physical strength and athleticism so many commented on over the course of his adult life. Spending much of his time outdoors—typical for boys in the 18th century and for generations after—George must have traversed that hill at least a dozen, and probably more, times each day. That trek, particularly if done with any pace, certainly would develop muscles and build stamina even without the swimming, tree climbing, wood chopping, rock throwing, and other boyhood pursuits that undoubtedly occupied young George. The same level of physical conditioning would have been vastly more difficult to achieve on a flatter tidewater plantation.

My other striking observation was the proximity of the slave quarter to the Washington home. That archaeological site was no more than 15 or 20 paces from the master’s dwelling, meaning that young George surely saw and interacted with the slaves on a regular basis throughout each day. Slavery was not a distant concept for George, with the slave quarters located on some remote acreage, but a reality that he faced in an unavoidable and concrete manner. Dave Muraca explained the placement of the Washington home and slave quarters as logical because the spring for water was nearby. Still, knowing that Washington experienced slavery and slaves in this way from his youth adds a new dimension when thinking about his beliefs regarding this controversial and troubling institution in early American society.

The hours spent at Ferry Farm proved most rewarding. Even the rain that began while I walked the grounds on a gray day did not dampen my enthusiasm. I made the right decision when I wore my hiking boots. The hillside from the house to the river is a challenge, and it became more treacherous when wet!