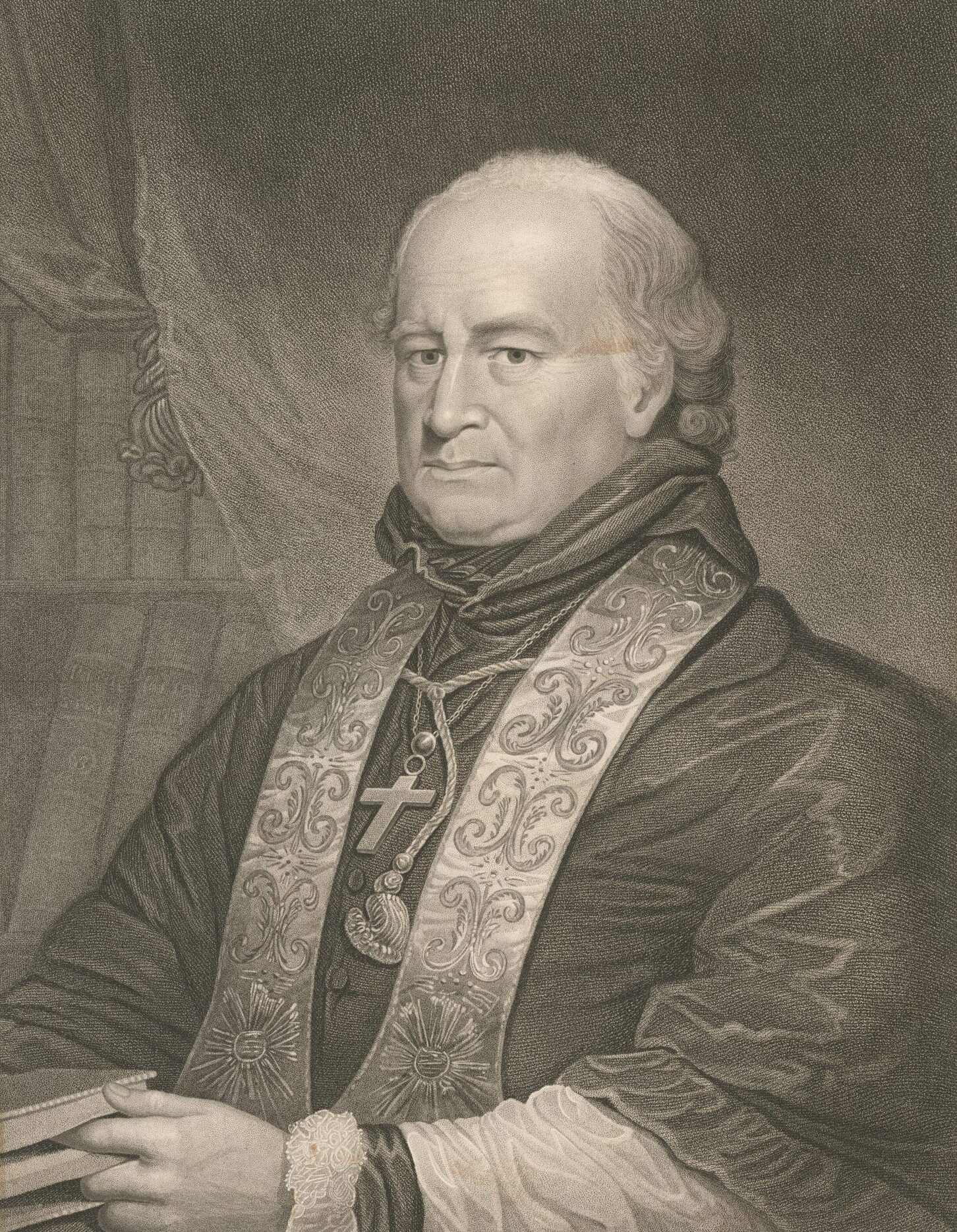 On Feb. 22, 1800, a crowd gathered in St. Peter’s Church, then the pro-Cathedral in Baltimore. They had come to hear Bishop John Carroll’s eulogy of George Washington. When Carroll spoke, he mourned the loss of a wise leader but reminded the crowd of the hope of resurrection. “To be allied with wisdom,” the bishop declared, “is immortality.”1

John Carroll was born in Maryland on Jan. 8, 1735. He studied at the English Jesuit College of Saint Omer, France, entered the Society of Jesus in 1753, and was ordained a Jesuit priest in 1769. His world was upended, however, when a papal decree suppressed the Jesuits in 1773, and he set sail for America the following year. Carroll became a prominent Catholic and political figure in America. He served with the Congressional Committee of Three to Canada in 1776 to provide a Catholic voice in that unsuccessful venture to ally Canadians to the American struggle for independence. More than a dozen years later, Carroll helped to write an address to Washington to congratulate him on his election to the U.S. presidency and remind him of the Catholic presence in the nascent country. Washington replied with glowing compliments to the Catholic community and, more importantly, a promise of religious toleration.2

Carroll’s eulogy of Washington reflects the widespread gratitude of religious minorities toward Washington for his commitment to religious tolerance. He heralded Washington’s religiosity with a particular emphasis on the idea of a man of destiny: Providence, according to Carroll, delivered Washington in his travels through “savage” territory in order to save him for his divinely ordained purpose.3 The main theme of Carroll’s eulogy is wisdom. He styled this eulogy like a homily, drawing every point back to the Book of Wisdom, chapter eight. For Carroll, Washington exemplified God’s wisdom by maintaining peace in the turbulent 1790s, sowing unity amidst religious differences, and sacrificing his own comfort for the public good of the nation.

But the peace that Carroll praised in 1800 dissipated by 1812. The nation was then at war with England, a conflict that many politicians blamed on the trade disputes brought on by numerous embargoes enacted by the administrations that followed Washington’s. Daniel Webster, the newly elected Federalist representative from New Hampshire, was among those critical politicians.

Webster was born on Jan. 18, 1782. After serving in the House of Representatives as a Federalist, he entered the Senate representing Massachusetts in 1827. Webster became secretary of state for three years beginning in 1841, returned to the Senate in 1845 for five more years of service, and unsuccessfully sought the Whig Party nomination for president in 1852. Throughout his life, Webster was a famous lawyer who argued many cases before the Supreme Court. He is well-known for his support of the Compromise of 1850.4

Webster’s desire for unity and peace was just as much present in 1812. In a July 4 address to the Washington Benevolent Society at Portsmouth, N.H., Webster lauded Washington’s “sober wisdom” that guided the nation through many troubling times without resorting to war.5 He cited Washington’s neutrality and impartiality as the pillars of virtue and bemoaned the current state of the nation.6 Echoing Carroll, Webster described Washington as an example of wisdom and unity for the nation. And Webster hailed Washington’s ability to see past the “temporary prejudices” of portions of the country in 1793, clearly referring to the question of giving aid to France during the War of the First Coalition.7 For both Carroll and Webster, Washington appeared as unprejudiced and impartial in all deeds.

Differences distinguish Carroll’s eulogy and Webster’s address. Webster looked more retrospectively on Washington. He sought to use him in his castigation of war-happy politicians in 1812. His audience, Webster said, should “take counsel from the dead” in a time of danger for the nation.8 For Webster, Washington was less a moral example than a national one. He explicitly tied the Fourth of July to Washington and colored the past in a partisan, anti-war light. Anti-Catholic sentiments marked Webster’s address, specifically when discussing the French, whom he referred to as “papists, infidels and atheists” who will never share a common character with the “Protestants, the Dissenters” and “the Puritans of New England.”9

Despite Webster’s prejudice against Catholics, both he and John Carroll revered Washington in similar ways. They hailed his wisdom, his piety, his impartiality and his neutrality. They both upheld Washington as the perfect example of civic duty. Carroll praised him as a pillar of tolerance; Webster used him to judge other politicians. Both saw Washington as a standard to measure all others. For Carroll, Washington was the “Father of his country.”10 For Webster, all other presidents were merely his “successors.”11