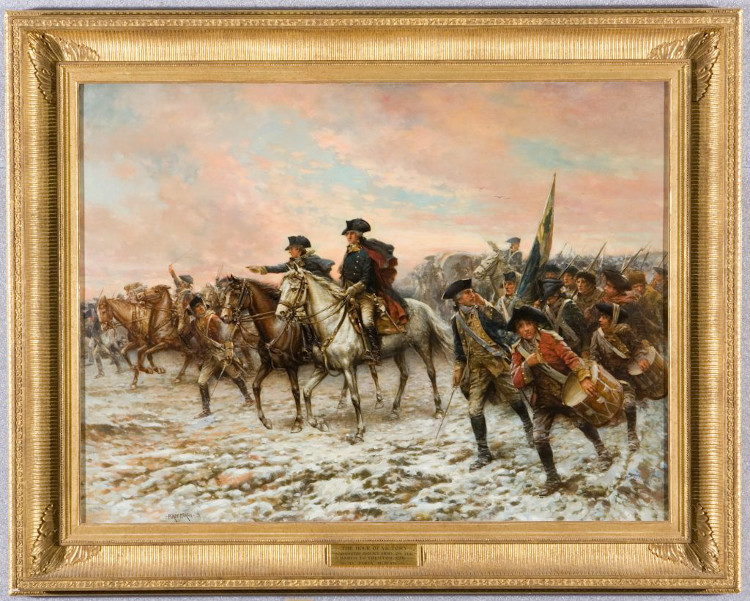 “I have the pleasure of congratulating you upon the Success of an Enterprize, which I had formed against a Detachment of the Enemy lying in Trenton, and which was executed yesterday Morning.”

With these words, Washington announced to Congress his victory over three Hessian regiments posted at Trenton, N.J., on the morning of Dec. 26, 1776.1 For most of the previous two months the general and his army had gone from defeat to defeat, with the worst of these being the fall of Fort Washington (the subject of my last blog). Now, in one swift blow, Washington had restored his faltering reputation and lifted the army’s morale. With the British and Hessian forces in New Jersey and New York greatly outnumbering his own, Washington took a great risk in making his attack, but he felt he had to go on the offensive to restore confidence in the American cause and energize recruitment for the army.

In his report to Congress, the general outlined his attack. He had planned to assemble the army, which numbered between 2,500 and 3,000 men, at McKonkey’s Ferry on the Pennsylvania side of the Delaware River on the evening of December 25 and, after dark, cross them over to the New Jersey shore by midnight. His small army could then arrive in front of Trenton by dawn. “But,” Washington reported, “the quantity of Ice, made that Night, impeded the passage of Boats so much, that it was three OClock before the Artillery could all be got over, and near four, before the Troops took up their line of march.” He gave up hope of surprising the Hessians since the army could not reach the town before sunrise, “but as I was certain there was no making a Retreat without being discovered, and harassed on repassing the River, I determined to push on at all Events.”

Thereafter the attack proceeded swiftly. Washington formed the army into two divisions “one to march by the lower or River road, the other, by the upper or Pennington Road.” The general ordered each division, after pushing past the Hessian outpost guards, to march directly into Trenton and charge the enemy before they had time to form. “The upper division arrived at the Enemys advanced post, exactly at eight OClock, and in three Minutes after, I found from the fire on the lower Road that, that Division had also got up. The Out Guards made but small Opposition, tho’, for their Numbers, they behaved very well, keeping up a constant retreating fire from behind Houses. We presently saw their main Body formed, but from their Motions, they seem’d undetermined how to act.” The American troops quickly captured part of the Hessian artillery. When some of the Hessian troops attempted to escape by moving off on a road leading to Princeton, Washington “threw a Body of Troops in their Way which immediately checked them. Finding from our disposition, that they were surrounded, and that they must inevitably be cut to peices if they made any further Resistance, they agreed to lay down their Arms.”     Some of the Hessian soldiers made their escape before the Continentals fully surrounded the town, but Washington claimed the capture of 23 officers and 886 men.2 “Our Loss,” Washington noted, “is very trifling indeed, only two Officers and one or two privates wounded.”

The general did not fail to praise his soldiers:

In justice to the Officers and Men, I must add, that their Behaviour upon this Occasion, reflects the highest honor upon them. The difficulty of passing the River in a very severe Night, and their March thro’ a violent Storm of Snow and Hail, did not in the least abate their Ardour. But when they came to the Charge, each seemed to vie with the other in pressing forward, and were I to give a preferance to any particular Corps, I should do great injustice to the others.

With only the force he brought over at McKonkey’s Ferry available for action (one division of Continentals and the Pennsylvania militia had been unable to cross due to the large quantity of ice in the river), Washington decided to forgo any further attacks as too risky. After arranging for the transport of the prisoners, Washington crossed his army back to the Pennsylvania side of the river to plan his next move. Despite Washington’s inability to continue his attack, the victory at Trenton nevertheless succeeded in clearing the British and Hessian posts on the Delaware River. Mount Holly, Bordentown, and Burlington were all evacuated.

After receiving this letter, the executive committee of Congress sent their congratulations to Washington:

We . . . rejoice in your Excellencys success at Trentown as we conceive it will have the most important publick consequences and because we think it will do justice in some degree to a Character we admire & which we have long wished to appear in the World with that Brilliancy that success always obtains & which the Members of Congress know you deserve, permit us to Congratulate you on this success & to suppose it is only the beginning of more important advantages . . . It appears to us that your attack on Trentown was totally unexpected, the Surprize compleat, & the Success beyond expectation.

Historian Chistopher Ward points out that Washington’s victory quickly became a turning point in the war: “The effect upon the American people was . . . instantaneous . . . From the depth of despair they rose to new confidence. From every direction came news of militiamen on the march to serve for two months, while the new Continental army was being organized.”3 Washington had achieved his objective.

This letter with full annotation appears in volume 7 of The Papers of George Washington, Revolutionary War Series.

1. The Hessian regiments, totaling about 1,500 men, were the Fusilier Regiment von Lossburg, the Fusilier Regiment von Knyphausen, and the Grenadiere Regiment von Rall. Also present were a Hessian artillery detachment, fifty Hessian jägers, and twenty British light dragoons.
2. On the return of prisoners Washington submitted with this letter, the total number of prisoners taken was listed as 918.
3. Christopher Ward, The War of the Revolution, 2 vols. (New York, 1952), 1:305.