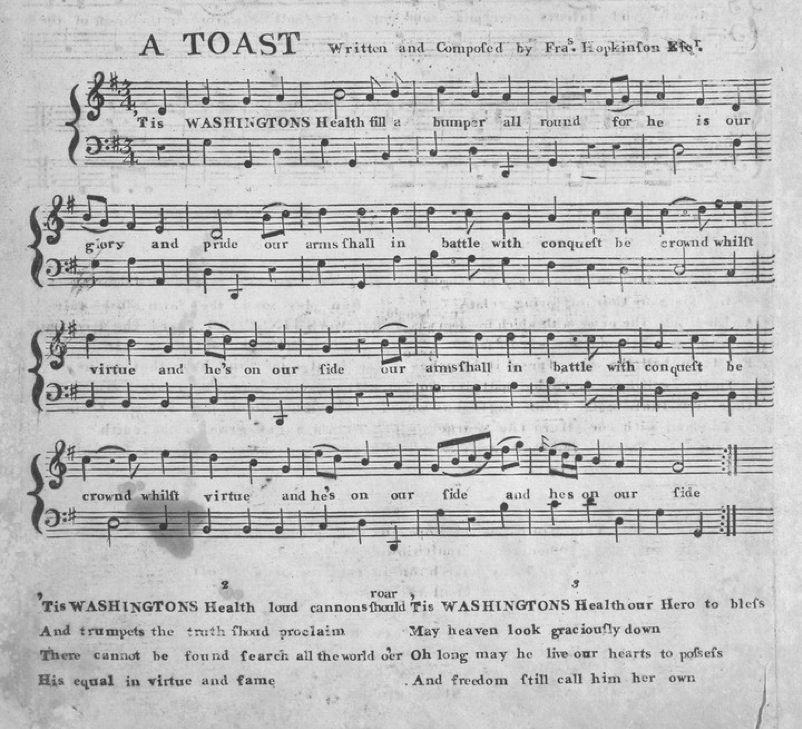 Unlike George Washington, Francis Hopkinson seems to have craved attention, enjoying both the public eye—and ear. From his days as a student at the College of Philadelphia through an impressive career as lawyer, statesman, judge, scientist, and inventor, Hopkinson often spoke publicly and wrote extensively. What few realize about him, though, is that he was intimately involved in shaping Americans’ opinions before, during and after the Revolutionary War—through song lyrics.

Hopkinson’s song “A Toast,” to which you are perhaps now listening, is but one of the signer/poet’s many musical outbursts. In three verses, he elevates the Gen. George Washington to a virtuous hero, and with stupendous foresight Hopkinson notes:

Oh long may he live our hearts to possess/And freedom still call him her own.

“A Toast” is particularly notable because Hopkinson both composed the melody and wrote the words. In most other cases, his “songs” are parodies, that is, music created by writing new words to an older familiar tune. (This was an extremely common process in early America; our national anthem stands out as an excellent example.) Hopkinson’s parodies include the farcical, sarcastic spoof “The Battle of the Kegs,” which mocks the British navy as it sailed up the Delaware towards Philadelphia in 1778.2 Drawing upon familiar tunes by George Frederick Handel and others, Hopkinson also wrote the lyrics for a serious, oratorio-like stage piece that was presented under the title of The Temple of Minerva to the French officers on their way to Yorktown in 1781. To support Pennsylvania’s ratification of the Constitution, Hopkinson wrote “The Raising.”3 Another of Hopkinson’s songs deserves a brief mention here. For the very public funeral of Benjamin Franklin, Hopkinson composed an “Ode—Sacred to the Memory of Dr. Franklin” to the English tune of “Flow Thou Sweet Afton.”4 Click to hear Hopkinson’s “Ode.”5 These two famous Philadelphians knew each other; in fact, Hopkinson invented a keyboard fitting for Franklin’s glass armonica, although it’s not known how well the improvement worked. While Hopkinson has been credited with composing many musical pieces, both vocal and instrumental, not all are proven to be by him, and they are too numerous to continue discussing in this brief article.

Francis Hopkinson (b. Philadelphia, Sept. 21, 1737; d. Philadelphia, May 9, 1791), though an amateur in the truest sense of the word, was nevertheless a poet, performer on the harpsichord and organ, arranger, teacher, and composer of music. He corresponded with Thomas Jefferson regarding how to re-quill a harpsichord and as a young man published a collection of Psalm tunes. Hopkinson asserted publicly that he composed the nation’s first real song (a claim of continued debate today), and he wrote an article on the expected behavior of the ideal church organist. He was opinionated and eager to share those opinions. It is not clear whether he simply loved the attention music brought him or genuinely adored lyrics as a vehicle for his bottomless cleverness; it was probably a mixture of both. Still, Hopkinson’s central role not just in planning but literally being in the middle of the huge Ratification parade in Philadelphia demonstrates that the man loved attention.6

Hopkinson’s masterpiece, in terms of more formal composition of tunes as well as lyrics, is his Seven Songs for the Harpsichord or Forte Piano. The Words and Music Composed by Francis Hopkinson, which was published in Philadelphia in 1788 by T. Dobson. Eight songs were actually published in this bound set, the eighth and final one being appended to the end after the title page, which indicated seven songs, had been engraved.7

Within this very public musical dedication to Washington (see above image), Hopkinson waxed poetic, as expected. As if that were not enough, he also followed up with equally ebullient language in a personal letter, to which Washington replied:

We are told of the amazing powers of musick in ancient times; . . . If I before doubted the truth of their relations with respect to the power of musick, I am now fully convinced . . . [it] . . . could sooth the ferocity of wild beasts, could draw the trees and the Stones after them, and could even . . . melt the Ice of the Delaware and Potomack8

It has been purported that Francis Hopkinson, so eager for public recognition and to gain an advantage, was hoping to be appointed chief court musician to the president.9 But that’s a conjecture to be studied in another essay.

Published in 1788, Hopkinson’s gift of music for the harpsichord possibly prompted Washington to order a lovely new harpsichord for Martha’s granddaughter Nelly Custis. It arrived at the President’s House in Philadelphia in 1793 and survives to this day, although no longer playable. The Mount Vernon Ladies’ Association recently commissioned an exact replica {click to investigate}, now happily ensconced in the “New Room” and upon which this author has had the pleasure to perform.

In closing, I note that Hopkinson’s son Joseph wrote lyrics to “The President’s March,” a piece composed for Washington’s first inaugural by the captured Hessian musician Philip Phile. Joseph’s lyrics were entitled “Hail, Columbia!” and the song became the unofficial national anthem of the United States midway through the 19th century.10

1. David and Ginger Hildebrand. George Washington: Music for the First President. Colonial Music Institute, H-105, 1999, compact disc.
2. A curious reprint of “The Battle of the Kegs” appeared in 1866, offering up a full page for each of the twenty-two verses: https://babel.hathitrust.org/cgi/pt?id=chi.088016734;view=1up;seq=1;size=75.
3. For these songs and other matters, see the author’s article about Hopkinson for the Mount Vernon Digital Encyclopedia: www.mountvernon.org/library/digitalhistory/digital-encyclopedia/article/francis-hopkinson/. The article considers relevant correspondence between Hopkinson and Washington that discusses the power of music and its role in society—something rarely mentioned in Washington’s other letters.
4.  Such was the importance of the occasion that the “Ode” became the first piece of music to be printed with musical notation in an American newspaper (Massachusetts Spy [Worcester], Sept. 2, 1790), and the lyrics circulated widely in print.
5. Franklin’s ode was recorded by David and Ginger Hildebrand in Music in the Life of Benjamin Franklin, Colonial Music Institute, 2006, compact disc.
6. Oscar C. G. Sonneck. Francis Hopkinson—The First American Poet-Composer (1737-1791). Published together with James Lyon—Patriot, Preacher, Psalmodist (1735-1794), Washington, D.C., 1905; Whitfield J. Bell, Jr., ed. Francis Hopkinson’s Account of the Grand Federal Procession, Philadelphia, July 4, 1788. Old South Leaflets Nos. 230-31.
7. Notable among other recordings of these songs is America Sings, Vol. 1: The Founding Years (1620-1800), the Gregg Smith Singers (VoxBox, 2 CDs: CDX 5080, 1993 re-issue of 1976 LP set), which includes all eight songs. For a public-domain score, see https://www.loc.gov/resource/ihas.200187397.0/?q=Seven+Songs+Hopkinson&sp=1.
8. George Washington to Francis Hopkinson, Feb. 5, 1789, The Writings of George Washington, 30:196-97.
9. Katherine Hines Mahan, “Hopkinson and Reinagle: Patriot-Musicians of Washington’s Time,” Music Educators Journal 62, no. 8 (1976): 42.
10. Nelly Custis hand copied Joseph Hopkinson’s lyrics on a sheet preserved at Harvard.