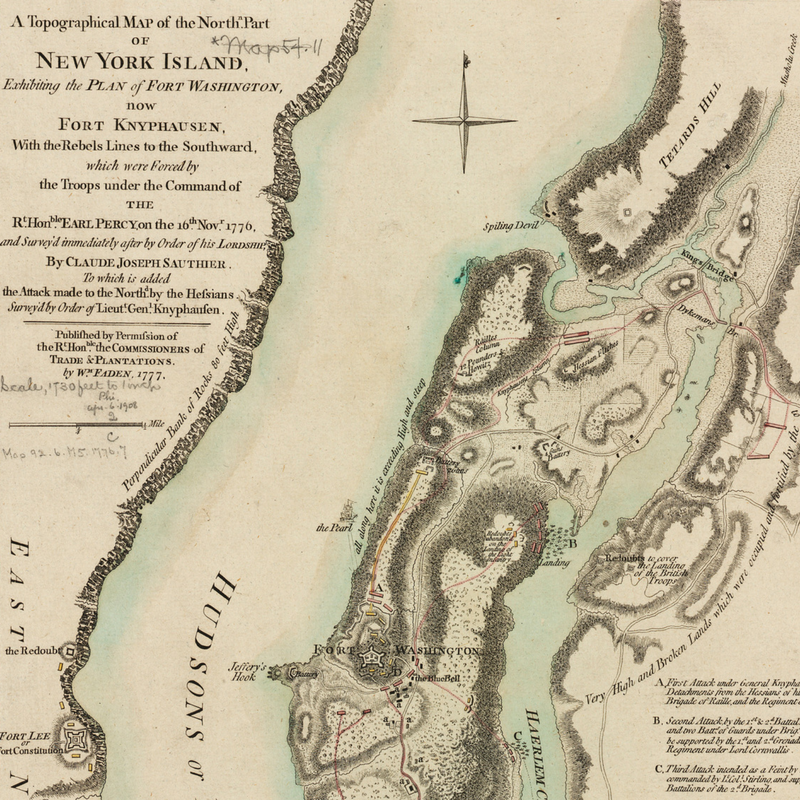 “This is a most unfortunate affair and has given me great Mortification as we have lost not only two thousand Men that were there, but a good deal of Artillery, & some of the best Arms we had.” So wrote General George Washington to his brother John Augustine Washington in November 1776 about the loss of Fort Washington.1 The fall of the bastion, with its garrison of 2,900 officers and men, on Nov. 16, 1776, was Washington’s worst defeat (excluding Charleston, S.C., in 1780, where he was too distant from the scene of action to affect the outcome). Fort Washington was located along the Hudson River on a high bluff in the northern part of Manhattan Island. Along with Fort Lee directly across the river in New Jersey, it formed the chief defense against a British naval advance up the river. Most American officers considered Fort Washington virtually impregnable.

At the time of the fort’s fall, Washington and his main army were in retreat across New Jersey, after having been driven out of lower New York by General Sir William Howe and his British army. But the American general, believing he should throw every possible obstruction in the way of British conquest of New York and New Jersey, decided to retain a garrison in the fort.2

When Washington evacuated the rest of his army from Manhattan Island, he left a garrison of 1,200 men in Fort Washington and gave orders to the garrison’s colonel “to defend the post to the last Extremity.” However, given the fort’s isolation and its vulnerability to an attack by Howe’s whole force, he later modified those orders to give discretion to Major General Nathanael Greene, the area commander, “to retain or evacuate the post as he should think best.”3

The British attacked the post with four corps on Nov. 16. The American troops defending the fort’s outer works were spread too thin, and their lines were quickly penetrated, although they inflicted heavy casualties on the attackers. The British and Hessians pushed the Continentals and militia back into the fort. Surrounded with no hope of relief, they soon had to surrender. Washington nearly became a casualty when he decided to visit Fort Washington during the early part of the engagement. Greene, writing on the 17th, explained to a fellow officer that on

Yesterday morning General Washington, General Putnam, General Mercer, and myself went to the Island to determine what was best to be done, but Just at the instant we stept on board the Boat the Enemy made their appearance on the Hill where the monday action was, and began a severe Cannonade with several field pieces. Our Guards soon fled, the Enemy advanced up to the second lines. This was done while we were crossing the River and geting upon the Hill. The Enemy made several marches to the right and to the left, I suppose to reconnoiter the fortifications and lines. There we all stood in a very awkward situation; as the disposition was made and the Enemy advancing we durst not attempt to make any new disposition—indeed we saw nothing amiss. We all urged his Excellency to come off. I offerd to stay. General Putnam did the same and so did General Mercer, but his Excellency thought it best for us all to come off together, which we did about half an hour before the Enemy surrounded the fort.4

The fall of the fort embarrassed Washington, and many, including at least one of his staff officers, questioned his military judgment.5

In his letter to his brother, Washington cast the blame for the fort’s fall on Greene. Washington had arrived “a day or two before it surrendered,” but had not, he asserted, come in time to take measures to save Fort Washington. “And what adds to my Mortification,” he wrote,

is, that this Post . . . was held contrary to my Wishes & opinion; as I conceived it to be a dangerous one: but being determind on by a full Council of General Officers, & receiving a resolution of Congress strongly expressive of their desires, that the Channel of the River (which we had been labouring to stop a long while at this place) might be obstructed, if possible; & knowing that this could not be done unless there were Batteries to protect the Obstruction I did not care to give an absolute Order for withdrawing the Garrison till I could get round & see the Situation of things & then it became too late as the Fort was Invested. I had given it . . . as my opinion to Genl Greene under whose care it was, that it would be best to evacuate the place—but—as the order was discretionary, & his opinion differed from mine, it unhappily was delayed too long, to my great grief.

By implying that he had no time to decide whether to evacuate or defend the fort, Washington misled his brother. The commander in chief had in fact arrived at Fort Lee on Nov. 13; the enemy did not attack the fort until three days later. He had ample time to make a decision. Despite his own convictions, he failed to reverse Greene’s decision to continue defending the fort.

In his official letter to Congress explaining the defeat, Washington cast himself almost as a bystander to the events. He became involved only after the British had commenced their assault. The blame again appeared to fall on Greene.6 But his own irresolution was the main reason for the defeat. Even in a private letter to his brother, he could not bring himself to mention his indecision and hesitation.

Washington’s failure to take responsibility for the defeat at Fort Washington was not one of his finest moments. I believe it stemmed from his insecure position at that time. For more on this defeat and Washington’s later account of the fort’s fall, which I believe shows his maturation as a general, see my article “Washington’s Belated Admission,” published by the Journal of the American Revolution on April 23, 2014. In my next blog post, I will look at one of the most pivotal moments of the war: Washington’s victory at Trenton, N.J., on Dec. 26, 1776, and his letter to John Hancock of the next day reporting the triumph.