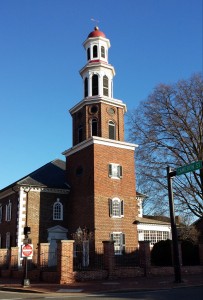 As the Washington Papers editor headquartered at Mount Vernon, I live and work in the community where George Washington spent his happiest times as an adult. Along with physically being on Washington’s estate during the week, I also serve as a docent at Christ Church in Old Town Alexandria on some weekends.1 Originally part of the Church of England (the Anglican Church), today Christ Church is part of the Episcopal Church in the United States of America (formed after the American Revolution).

Founded in 1749, the town of Alexandria had a small chapel of ease by 1753 and by 1766 the population was large enough that the Fairfax Parish vestry (a 12-member group of church administrators) ordered a church to be built. On January 1, 1767 the vestry made an agreement with a builder to construct a 40-by-60-foot church for £600.2 The exterior of the structure (minus the bell tower) is original, and while the interior has undergone several modifications over the years, today it appears as an 18th-century Georgian church.3 When at Mount Vernon, the Washingtons usually went to Pohick Church, but when in Alexandria on business or for a visit, they often attended Christ Church. Before the Revolutionary War, the Church of England was the established church in colonial Virginia, paid for by an annual levy on all tithables, and George Washington, like most Virginians, attended and supported that denomination.4

On May 14, 1767, during church construction, the vestry determined that “no one is permited to be a purchaser” of the new church’s pews “but Inhabitants in this parish or those that pays Taxes in the same”; George Washington was eligible since part of his Mount Vernon property lay in Fairfax Parish. The vestry received the completed church from the builder on  February 27, 1773, and subsequently ten pews were sold to the highest bidders, with Washington purchasing pew number 5 for £36.10, the highest price paid.5 Visitors today can sit in Washington’s box pew (the rest were converted to “slip” pews in the 19th century) and stand on the wooden planks that cover the pew floors—elevated then as now above the level of the aisles—to get an idea of what Washington experienced when he attended services.

The church’s Palladian chancel window behind the altar is a visually striking feature. James Wren (no relation to Christopher), who created the church’s architectural drawings, also hand-lettered the panels that flank the window. The Church of England directed that the Ten Commandments be posted on the east wall of every church so congregants could read them, along with “other chosen Sentences.” At Christ Church, these include the Apostles’ Creed, the Lord’s Prayer, and the Golden Rule.6 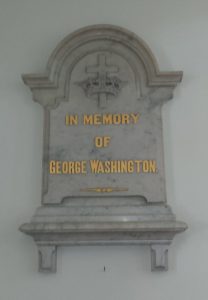 After the American Revolution, the church and minister were no longer supported by taxes. In 1785, George Washington and seven other subscribers signed an agreement stating that “the pews we now hold” at Christ Church “shall be for ever, charged with an Annual Rent of five pounds Virginia Money each … for the Purpose of supporting the Ministry in the said Church.”7 Along with the pew rent, Washington also gave other funds to Christ Church during his life. On February 22, 1793, Alexandria merchant Samuel Hanson wrote the president (who was then in Philadelphia) that the congregation wished to acquire an organ for the church, and added: “I have been instructed to leave a place” at the top of the list of subscribers “for a Name which has always been foremost in every undertaking both of private and public munificence.” Washington replied on April 7, returning the signed “Subscription paper” and commenting: “I am applied to for aids beyond my means—for in truth I escape few contributions to any thing of this sort—or to public buildings—such as Colleges Churches &ca &ca that are undertaken by Subscription within a circle of considerable extent around me. Were it not for these I wd have given a larger sum than is affixed to my name, as the measure is entirely approved.”8

One thought on ““Went to Church at Alexandria”: George Washington and Christ Church”